Ipsos’s latest Political Monitor reveals 43% of Britons think the economy will improve over the next 12 months (up 14 points from last month), 14% say it will stay the same (up 5), while 41% think it will get worse (down 19), giving an Economic Optimism Index score of +2 (compared with -31 in February). This is the most optimistic the British public have been on the economy since 2015 and the largest month on month improvement (a swing of 16.5 points) since our polling began in 1978 – although the fall in optimism at the start of the pandemic was even greater (when our Economic Optimism Index fell from -13 in February 2020 to -54 in March). 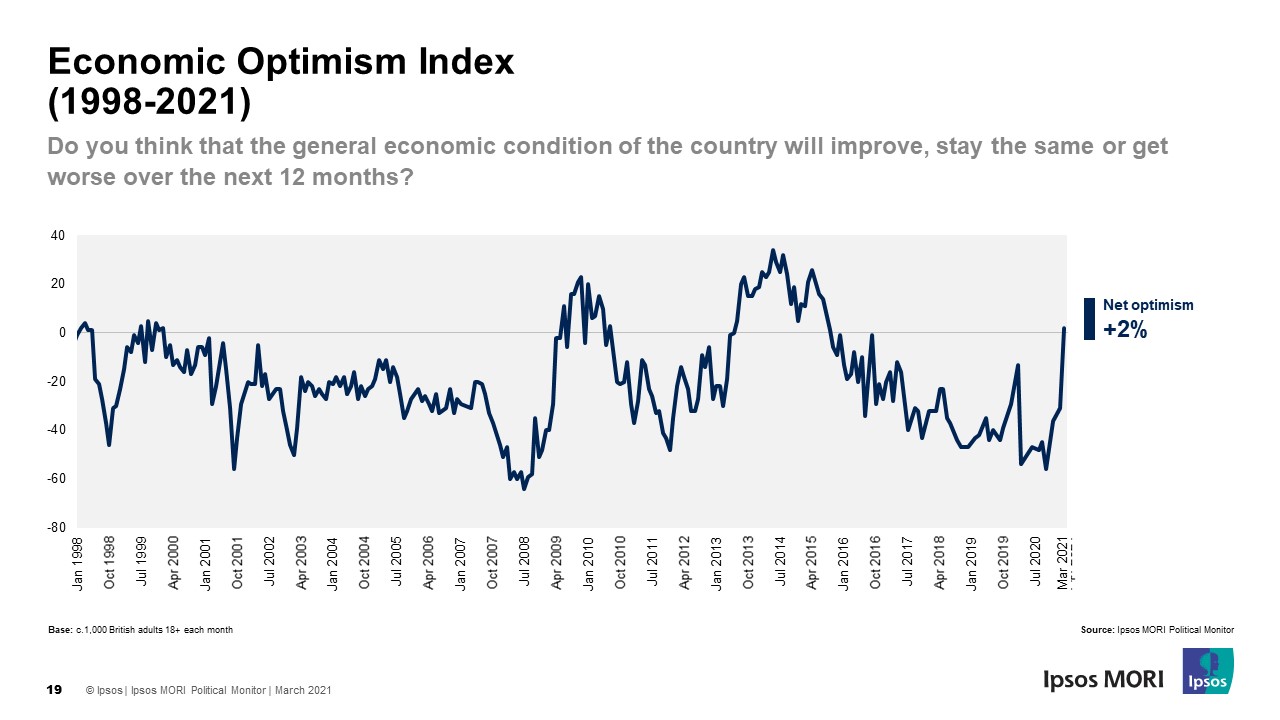 Other key findings in detail (changes from February unless otherwise stated):

Handling of the Covid-19 pandemic and vaccines 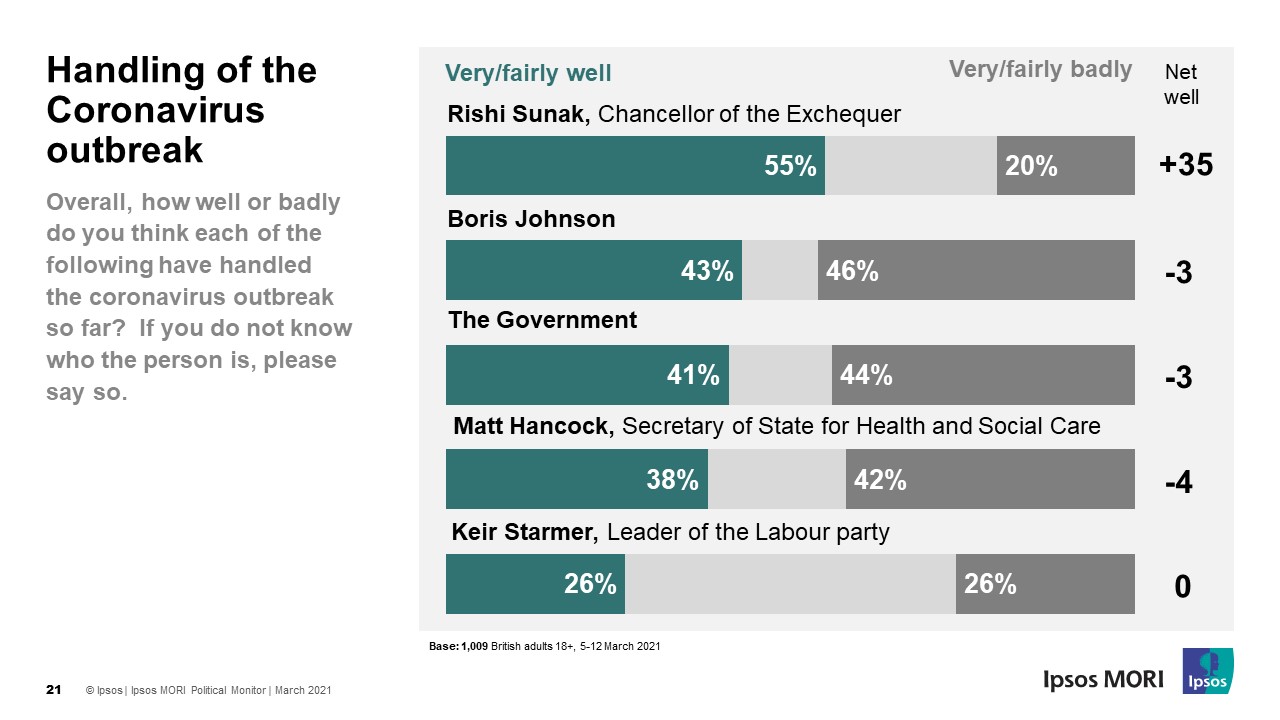 Who makes the most capable Prime Minister? 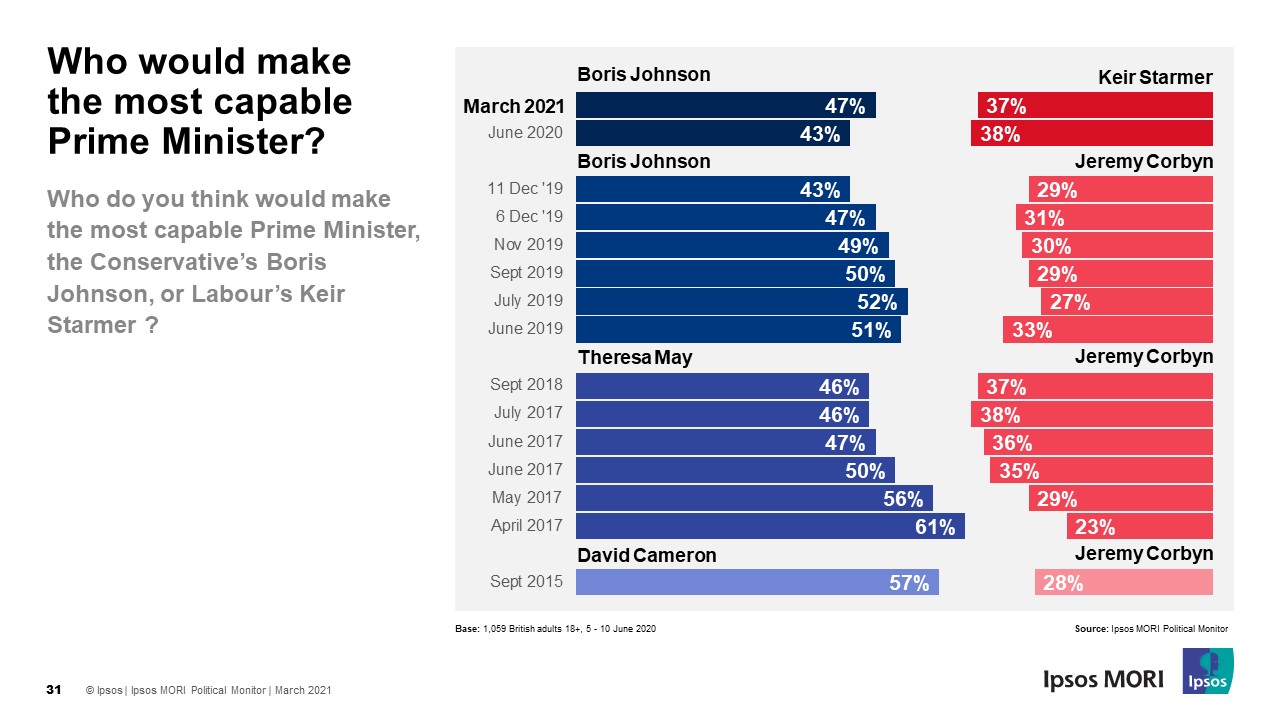 Although we shouldn’t be complacent that the pandemic is beaten yet, there are clear signs that the public is becoming more optimistic that Britain’s economy can bounce back from the hit it has taken over the last year, fuelled by very positive ratings about the vaccine rollout which have increased even further this month. Ipsos has been tracking Britain’s economic optimism for over 40 years, and never have we seen a bigger drop than at the start of the pandemic, nor a bigger rise than we see now one year on (admittedly from a low base), highlighting the huge impact the virus has had on the country. Even so, there are some groups – women, working age adults, social grades DE and in the north of the country – who are not as optimistic as others, and the recovery will need to deliver for them too.

Ipsos interviewed a representative sample of 1,009 adults aged 18+ across Great Britain. Interviews were conducted by telephone 5th – 12th March 2021. Data are weighted to the profile of the population. All polls are subject to a wide range of potential sources of error.