Half of the British public think UKIP is highlighting important issues, though four in ten also think it is out of touch 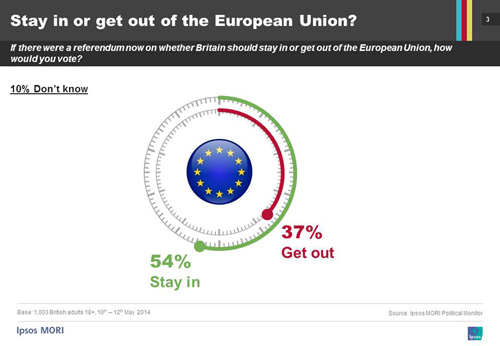 Public opinion is divided on the detail of Britain’s role in Europe, however. Around three in ten each would prefer to see ‘Britain’s relationship with Europe remaining broadly the same as at present’ (32%) and ‘Britain returning to being part of an economic community, without political links’ (30%). One in five would like to see ‘Britain leaving the European Union altogether’ (20%), with ‘closer political and economic integration’ with other EU member states the least favoured option (13%). There is some indication that UKIP may struggle to carry their momentum into next year’s general election. More than half (57%) think a vote for UKIP in a general election is a wasted vote. This figure is similar to that for the Liberal Democrats, voting for whom in a general election is considered a wasted vote by 54%. This does not appear to be a reflection of voter apathy generally, with just 11% agreeing that any vote in a general election is a wasted vote, compared with 83% disagreeing. When asked whether they would consider voting for the different parties or not, UKIP and the Liberal Democrats are tied as the parties most people say they are certain not to vote for in the upcoming European elections (67% and 68% respectively). For the Conservatives and Labour, the figures are 57% and 51%. However, while the other main parties see their pool of potential votes increase in a general election (for the Conservatives, 46% say they are certain not to vote for them in 2015, 43% for Labour and 62% for the Liberal Democrats), there is no such change for UKIP. In fact, the proportion who say they are certain to vote for them halves from 9% to 4%. 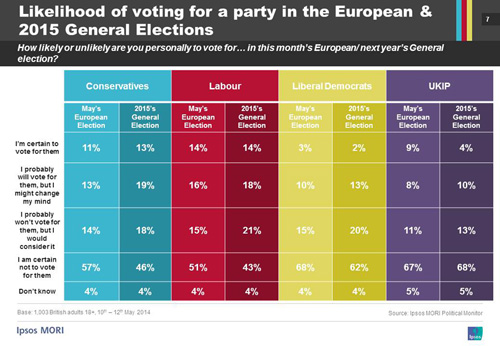 Further, when asked ‘Generally speaking, do you think of yourself as Conservative, Labour, Liberal Democrat, UKIP, or what?’ – a measure of voter identification, known as ‘the Michigan question’ after research in the 1950s by the University of Michigan - just 5% think of themselves as UKIP, compared with an 11% overall vote share for the party according to this month’s Political Monitor. Labour have the largest share on the measure, with 31% of Britons considering themselves ‘Labour’. Just over a quarter (27%) consider themselves ‘Conservative’, while 9% think of themselves as ‘Liberal Democrat’. 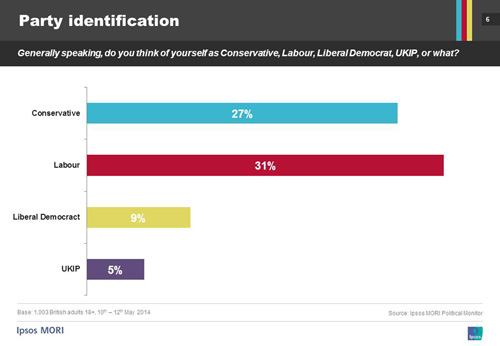 Despite this, half of Britons (51%) agree UKIP is highlighting important issues which other parties aren’t taking seriously enough (including 52% of Conservative supporters and 44% of Labour supporters), with 34% disagreeing. Opinion is more evenly split as to whether UKIP is out of touch with the modern world, with 43% saying they are a party out of touch with the modern world and 40% disagreeing. More Conservative supporters disagree with this description of UKIP (46%) than agree (40%), though Labour supporters are more critical (55% agree they were out of touch, 30% disagree). 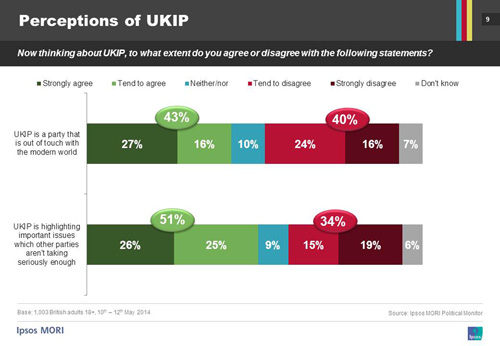 “The rise of UKIP is one of the key political events over the last few years, even though many people still don’t see themselves casting a vote for UKIP, especially once the European elections are over. But the party is pushing some of the right buttons for the public - even among those who are planning on voting Labour or Conservative. Meanwhile, on the issues of the election, after several years of hostility to Europe after the crash, people seem more willing to stay in the EU – though a reduction in its powers is still more popular than further integration.”

Ipsos interviewed a representative sample of 1,003 adults aged 18+ across Great Britain. Interviews were conducted by telephone 10th – 12th May 2014.  Data are weighted to match the profile of the population.