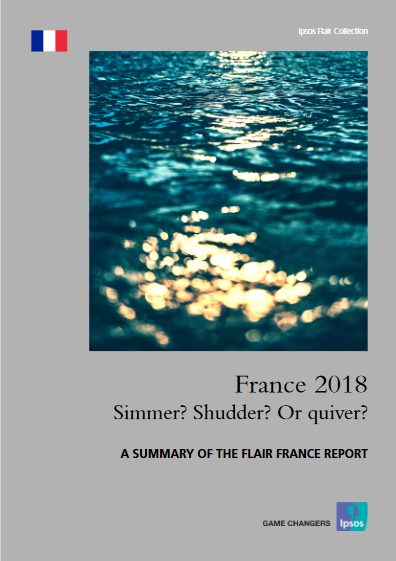 Is it a sign that France should stop complaining and start looking confidently into the future? This year Ipsos Flair explores three possible developments: a France that will simmer out of anger at undelivered promises, shudder at how fast the world is changing or quiver with joy at the idea that future could again mean progress.

With an annual GDP growth rate of 1.9%, increased workforce of 1.1%, a renewal of both political authority at home and a certain influence abroad, conditions are combining to cause a positive upturn of perceptions: 60% of foreign investors, and 72% of US investors, are already expecting an improvement in France’s economic environment.

2. France is loosening the purse strings.

There were 42.8 million transactions on Black Friday corresponding to a total sales volume of €3.8 billion. Car sales increased 10.3% during 2017 without any government incentive – French auto-makers’ sales leaping forward by 20%. In 2017, 42 million French residents went on holidays (2.2 million more than in 2016).

3. France has stopped looking in the rear-view mirror.

The proportion of respondents who consider that “times used to be better in France” decreased from 74% to 64%. A positive attitude towards what lies ahead is also illustrated by the fact that 53% of respondents (+10 pts. since April 2015) now think that “France’s future is full of opportunities”.

4. France is a game changer.

“Dégagisme” (“get lostism”) was the political buzz word of 2017: for the first time since the introduction of direct elections of the President, neither the representative of the conservative Gaullist tradition nor the candidate of the Socialist Party stood in the run-off of the Presidential election, leaving a populist far-right candidate and an independent candidate as the final two. Emmanuel Macron was unknown to the general public two years ago and has created what is now the largest political force in France in barely six months.

5. France wants to be beautiful.

TV celebrity Stéphane Bern has been charged with the mission of saving France’s architectural heritage. Beyond old stones, the human body is at the centre of attention: 5.46 million French men and women are members of a fitness club (+5% from 2015 to 2016). What used to be perceived as imperfections are now promoted as a positive way of asserting one’s personality. Glossier positions itself as “a beauty brand inspired by real life” and M.A.C. makes transgender-ness part of its aesthetics of self-creation in the ad campaign entitled “More than T”.

6. France wants to be upgraded.

The French consumer easily gets accustomed to a luxurious way of life: driven by a private chauffeur, attending restricted-admission event sales (“private sales”) and travelling in business class without paying the full fare. One just needs to ask if one wants to be upgraded or receive privilege benefits. But what could be perceived as just one aggressive sales policy among many others turns out to be first and foremost a reflection of enhanced consumer power to the detriment of well-established brands and imperils proven economic models. Long-distance air transportation and retail banking present two striking examples of this phenomenon.

Health is a sector where AI will be particularly useful to compensate for a lack of doctors in rural areas, to provide everyday personal assistance, and to improve elderly care. It will generate tens of thousands of new jobs which cannot be outsourced to low-wage countries: home digital equipment, medical equipment and robot maintenance, the new job of “medical supervisor” of at-a-distance patients. AI is at the core of a major change in curative and preventive healthcare.

8. France will always be epicurean.

Tasty meals remain a fundamental pleasure for 67% of French consumers and 60% consider good food to be a basic requisite of indulgence. But health is also a major concern associated with eating: 55% of French consumers regard cooking as a means of eating healthily. The vast majority (93%) consider a balanced diet to be an indispensable condition of good health.

Emmanuel Macron’s ascension to the presidency has changed the representations of authority and competence: the youth are not seen as the juniors anymore. Representations of age, skill and responsibilities are no longer automatically linked to each other. The opinion of Millennials matters: AccorHotels is one of the first major companies to have set up a shadow executive board whose members are all under 35.

Because of this concern, the French tend to overestimate the proportion of immigrants in France’s population (they put it at 26% while, in reality, it is 12%) and of Muslims living in France (31% vs. 8%). They even believe that Muslims will make up 40% of the population in 2020 (just two years from now!).