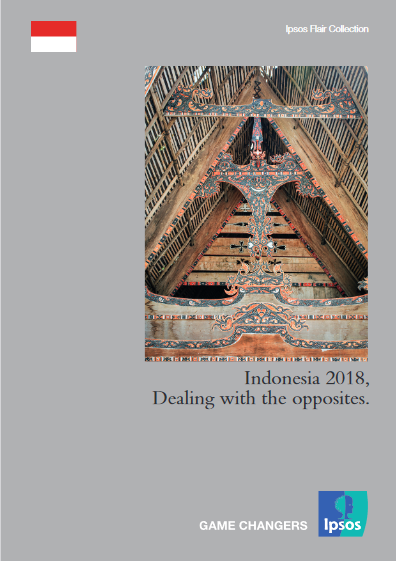 Indonesia is more often in the news because of volcanic eruptions, tsunamis or other disasters, than for a more positive coverage. It is all the more unfair since the country, one of the most attractive in the world for tourists, has been experiencing sustained economic growth for decades and, since the election of the President Jokowi, has undertaken an unprecedented effort to modernize its infrastructure not just in Jakarta but all over the archipelago.

Ipsos Flair’s purpose is to do justice to Indonesia by revealing the deep dynamism of society and the opportunities offered by its variations of local and international brands. It is also an opportunity to discover the innovation potential of its entrepreneurs.

1. Indonesia isn’t in the spotlight enough.

The country accounts for 40% of the ASEAN’s GDP, with a middle class whose size is set to treble by 2030. Trend forecasters are confident: PwC’s “The World in 2050” report highlights a shift in economic power from the G7 countries (United States, Japan, Germany, the United Kingdom, France, Italy, Canada) to the group of emerging economies named “E7”, namely China, India, Brazil, Russia, Mexico, Indonesia and Turkey.

2. Indonesia will have a growing weight in the APAC region.

3. Indonesia is dealing with the opposites.

GDP per capita ranks 107th in the world, with 100 million Indonesians (out of 260) living below or on the poverty line. It is a very buzzing topic in the social networks globally: the four richest men in Indonesia are richer than the 100 million poorest.

4. Indonesia is still a young country.

30 years is the median age in Indonesia (29.3 years for men, 30.5 for women), making it a young country, at least younger than some of its neighbours, such as Japan (45.2/47.9), China (36/37.7), or Thailand (35.7/37.7). For the new generation, development plans, career acceleration, promotions and positions, job propositions, are the major issues. In this digital age, everything must go fast. The private sector is much more appealing and perceived as fairer than the public sector.

The demand for apartments is higher than for single-family homes, for the first time in Indonesia, in line with the lifestyle of Millennials. Vehicle sales are growing, as in the five other largest countries in Southeast Asia (Thailand, Malaysia, Philippines, Vietnam and Singapore). They have posted their first double-digit increase for eight months.

6. Indonesia is a competitive market.

The competition between international and local brands grows stronger and stronger. International FMCG brands are confronted with a slowdown of their penetration. Local brands offer good value for money for daily life products (washing, cleaning etc.). Big brand status is important, but along with that comes the expectation of differentiation and justification for any premium charged.

7. Indonesia is embracing the digital age.

The Internet is seen as a provider of answers to any kind of question or desire, as we can see in our survey “Internet Security & Trust”: 65% of Indonesian respondents trust the Internet (vs. 34% of Korean or 32% of Japanese). Leading the world, 95% of Indonesian respondents are likely to use mobile payment systems on their smartphones in the coming year (vs. 86% in China or in India, 44% in Australia, 29% in Japan, 27% in Germany and France).

8. Indonesia is experiencing the rise of individualism.

For an increasing of number of Indonesians, life is a competition between individuals. Status and uniqueness are key to success: Indonesians are hungry for new things and constant change. They will not keep a mobile phone for more than two years, although it still works very well. But the next one is there and people must show that they have already got it. We also see this trend in the automotive sector. It explains the success of some Japanese brands.

9. Indonesia has a dualistic media landscape.

TV remains the main media for entertainment, offering dramas, soap, Indian movies, Bollywood, musicals, “The Voice”, etc. If TV is the mass media amusing the public, the Internet is the place where to seek and share information, news, views. The campaigns for the election of governors, especially in Jakarta, have exemplified this dichotomy.

10. Indonesia demands a lot from women.

They are wives, mothers, aunts, sisters, colleagues, housekeepers if not servants, etc. But women are now given more opportunities: services, beauty salons, fashion… everything that supports a desire for comfort and status within the middle class. Women are also more financially independent and feel free to decide  their expenses without increasing their husbands’ financial burden.