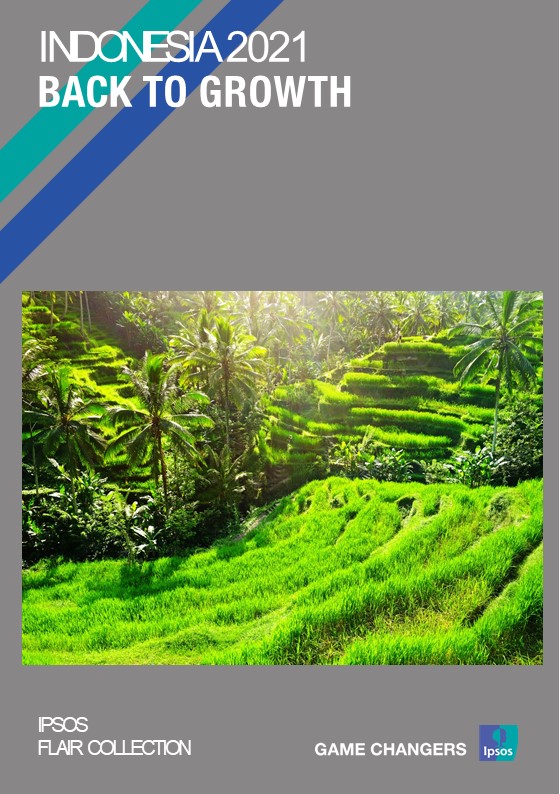 Mostly, Indonesians were not locked down and nearly 99% of establishments were left open with precautionary measures. The Indonesian government’s strategy for distributing the Covid-19 vaccine prioritized different groups, in terms of priority and risk of contracting the virus. Stage one was for health workers, stage two for the elderly and public service workers (such as retailers in traditional market, teachers, police officer and soldiers, etc.). When we look at the number of victims and level of suffering, the situation is much more positive than in other countries. According to Ipsos’ SEA 3rd wave study in February 2021, the country remains the most optimistic (76%) about the economic recovery over the next six months compared to other countries in the region.

2. The Indonesian outlook is positive.

During the crisis, the focus was about illness, such as those with an impaired immune system, who are obese or have nutritional deficiencies. The trend now turns to fresh, healthy, seasonal products; the premium went to fruits and vegetables known to be rich in vitamins such as avocados, papayas and oranges as they protect the body’s natural defences. These new habits will stay because people have felt the physical and psychological benefits: feeling better, healthier and building a sense of vitality.

4. Indonesian consumers are increasingly educating themselves about brands and products.

The relationship with brands is based on the emergence of new expectations about them, and advertising. Consumers want more clarity, more transparency. They look for more information, and compare. They are more and more self-discussing, more aware, and more demanding.

Almost all sectors have accelerated their transformation. The digital economy existed before March 2020, but Covid-19 gave it a boost given that online access was very unequal: a smartphone costs a month’s salary or even more for many. Operators have lowered their prices, and this discount has changed things, opening access to new ranges of the population.

The youngest in society have adopted communication technologies for using social networks, such as Tik Tok and Instagram, and for their shopping; telemedicine and teleconsultations have exploded, for people and for pets. And we have tele-entertainment, with the categories having benefited from the crisis being personal care, leisure and streaming platforms.

7. Jakarta is on its way to becoming one of the biggest smart cities in Asia.

The “no-contact” services and technologies accelerated by the pandemic makes possible the generalization of digital payments from smartphones, for municipal services and at supermarkets, Starbucks, KFC, hotels and cafes, BRT, MRT, LRT, toll, plane and train tickets,concert ticket payment, cineplex reservation, parking, hospital and doctor, housekeeping and costs of schooling. QR codes via smartphone apps have become an everyday part of Indonesians’ lives.

8. The future of Indonesia is electric, hydrogenic and geothermal.

Globally, electric propulsion and hydrogen are the two resources called upon to replace hydrocarbons and the economic stakes are colossal. Indonesia is now stepping up agreements with global manufacturers of electric batteries. In parallel, state-owned geothermal companies target an investment volume of around $500 million.

Indonesia is one of the world’s leading producers of nickel (nearly 20% of global production) and is the biggest producer of palm oil. Both nickel and oil represent today one of the most characteristic emblems of contemporary environmental struggles. Reconciling production, demand, ambition (the government plans to build 400,000 electric cars per year and a fleet of two million electric two-wheelers by 2025), environmental concerns, appetite for small producers, and attention to health, will be one of the conditions for responsible growth.

10. Indonesia wants to expand its attractiveness.

In response to the Covid-19 crisis, the government launched CHS Program (Clean, Healthy & Safety) for Indonesia’s tourism sector, including hotel, F&B and retailers. The World Tourism Organization declared that Bali is ready and very willing to start reopening to tourism, as we can spot with the preferential loan package to accelerate the recovery of tourism in Bali, to create jobs for more than 80% of the population ($US 670 million) and alert people on waste management.