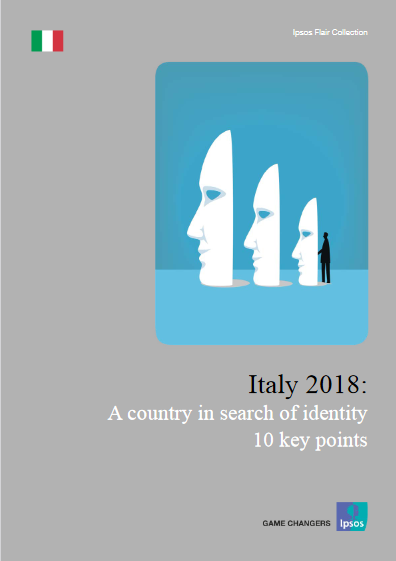 This year we have worked, as we always do, on the mass of information at our disposal, increasingly enriched by new forms of data collection, including web and social listening, communities’ opinions, and blog entries.

The economic recovery is taking place with better than expected results and is beginning to be realised by citizens, who for the first time in years have seen ‘no deterioration’ in their situation. Consumer spending has started again, thanks to a reduction in the need to save, but this does not produce social cohesion. Because it is difficult to foresee what will happen, new jobs are mostly temporary and the automation that cuts jobs is growing. Above all, the recovery has not yet removed the gap created by the crisis, as opposed to what is happening in France and Germany.

The classic North/South fracture is amplified. Apulia has approved a resolution to commemorate the southern citizens who lost their lives in the battle for the unification of the country; the regions of the North, Lombardy and Veneto, have responded with a referendum on autonomy. It is a country also divided within its own territories. Milan is different from the rest of the North and also from most of Lombardy, and Milan has begun to think of itself as a city-state, looking for guidance more at the network of smart Western cities than at its own state and government.

Inequalities in Italy have grown: the number of people at risk of poverty or social exclusion has increased from 26% in 2008 to 30% in 2016, against the forecasts of Europe 2020. The ‘working poors’ are growing i.e. those who, despite having a job, are in economic difficulty. Redistribution is unbalanced towards the elderly. Poverty among young families grew by eight points between 2007 and 2015, while among elderly families it fell by one point. Occupation, a central theme in recent years, is polarised. The intermediate professions have disappeared, as has employment in unskilled professions. The number of workers and artisans has fallen, so much so that in its annual report, the Italian National Institute of Statistics has tried to rebuild Italian society and trace the connotations of the new social classes.

The failure of Italy’s former Prime Minister Renzi to complete the long due reform programme redefines the political framework of reference. The Democratic Party is a party that has lost its identity and struggles to find social reference points. It is divided and its members are taking leave to the left and to the right. The centre-right aggregates often distant forces, particularly on Europe. On the one hand, the supremacism of Salvini and Meloni, on the other side Berlusconi who reiterates the same themes of ‘94. The 5StarsMovement is composed of a diverse electorate, with different political positions that do not agree on their overall agenda. The left does not have a programme other than the bitterness towards Renzi. In the recent election in March 2018, no party emerged with a clear majority, resulting in a hung parliament and the exposure of a divided nation with a new bi-polar political landscape.

5. In search of simplicity.

There is a growing demand for simplicity in terms of information; to receive less but clearer information. Consumers are demanding increasingly essential labels on products – those that are most relevant to them – and information able to bring the product into their personal circle of trust. To get noticed in this informational chaos, brands must therefore use every means to present themselves as friendly, genuine entities in real life and to be able to talk to people.

Growth continues in the “without” or “free from” segments of all those products characterised by the absence or reduction of some ingredients. From a puzzle made up of many pieces of “withouts”, dedicated to people with special dietary requirements, this movement is becoming mainstream, and accessible to all consumers. The development of this trend underlines how the increase in perceived value of a product can come not only from enrichment, but also from a well-thought-out operation of subtraction.

7. The brand in the process of construction of its own identity.

Brands are entrusted with the task of divulging values and visions of society, playing a role that we could define as “political” and supplementary to the lack of trust towards the classic institutional personalities. These were historically predisposed to provide meaning, values and interpretative keys to society. But in an era of radical transparency, what the brand says must be reflected in what the brand is. And this is how the corporate culture fuels the external image of the brand, an image that becomes increasingly important in purchase choices. These are in fact the years of relationship marketing, of sociality and of reputation, in which brands are no longer chosen based on product performance but on the proximity to the values they embody and the way they make consumers feel.

8. The thousand lives of TV.

Television continues to capitalise on opportunities arising from multi-platform use better than other media. While continuing to favour the television screen, the Italian public has now become familiar with the use of non-linear television content through digital devices. Watching TV thus becomes an activity modulated on individual timelines and rhythms of life, as well as on personal tastes, in a way which increasingly disconnects the audience from the show schedule. This evolution of consumption patterns has also opened new market spaces and new revenue opportunities: in 2017 the consolidation of the On Demand Video Services offer has been confirmed, with the arrival, after Netflix (in Italy since 2015) of Amazon Prime Video, another global player.

The traditional information industry is in a state of crisis that has lasted for some time and sees a steady decline in the number of readers, diffusion of printed copies and advertising revenues. There are various reasons for this, with a key one being the inability of the sector to identify a profitable business model for the multi-platform digital context. In particular, for paper printing, digitisation has meant entering an expanded competitive arena dominated by the overabundance of sources that are directly accessible and usable, within which the reader has acquired an increasingly central position. This has undermined the concept of authoritativeness recognised of the newspapers and it has immensely amplified the reader’s attitude towards autonomy and curiosity.

2017 was a year in which the theme of fake news was very relevant in Italy, but also the year in which (finally) the big players tried to take counter measures. Facebook and Google have adopted a series of initiatives operating mainly on three lines: to enhance and give visibility to fact-checking services; to increase the human workforce dedicated to the control of what circulates on social networks as a product of algorithms; and to try to find solutions for visually differentiating content that has responded to criteria of proven authenticity and reliability. The internet and social media have exacerbated the level of lack of confidence with the proliferation of fake news, but the phenomenon has taken place within a scenario where trust was already seriously damaged.