Here are the 10 key points from our new Flair Italy 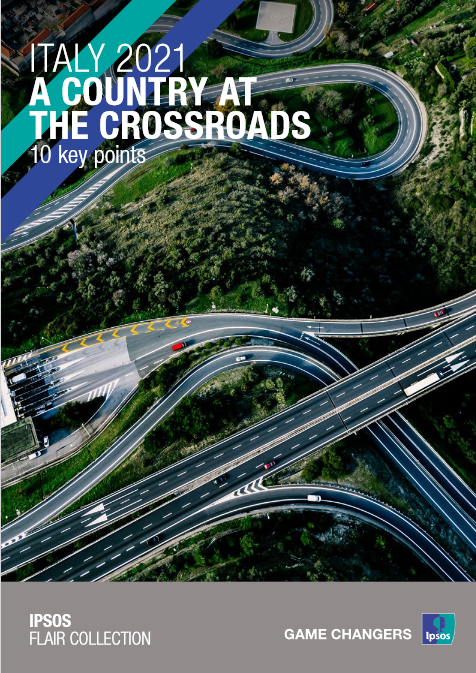 1. Italy at a crossroads

There are two avenues open to Italy: one is conservative, aimed at Italians first, protectionist and exclusive. The second is a vision of openness and being environmentally-conscious. If hope in a better future returns to levels observed this winter, when a government of national unity, the first in decades, was formed and billions of Euros in recovery funds became available (in March 2021, 29% of Italians say their country is on the right track, +4 pts. compared with February), the latter scenario is more likely to prevail.

The weight of the middle class in the national population has fallen by 10 percentage points in just 12 months, from 40% to 30%. Differences increase, with large parts of the lower middle class and the working class facing ever more serious economic hardship.

3. Social disturbances are still brewing behind the appearance of peace

Several sources of discontent are converging: anger from being demoted, frustration from being locked down or business stoppage causing shopkeepers’ outrage, disillusion with politics which fails to propose any positivity crime in impoverished suburbs. In March 2021, 71% of Italians say their country is on the wrong track: as many as a year earlier, when Italy was first locked down and at its worst point in the crisis.

4. A lack of trust in the country’s elites

Italians neither trust their politicians nor their entrepreneurs. They are seen as being aloof from people’s concerns and indifferent to the common good. 60% of all Italians consider unemployment to be one of the three major issues in their country. Italians acutely perceive a tension between economic prosperity and human welfare (with an average of eight on a scale from one to 10), but also between ethics and actual behaviours (7.8) or power and citizens (7.5), leading to a particularly insecure and distrustful public attitude.

5. Covid is more a national threat than a personal one

Italians move between a demand for more state intervention and for more autonomy. They want to reinforce their links to their community, but also to protect it from intruders. They aspire to warmer relationships with other individuals but have adapted to their social life being virtual. At moments they express a strong civic commitment and solidarity, at other times they act individualistically.

Health, hygiene, safety, rediscovery of ancient recipes and DIY are the preferred narratives at the moment, because of a perceived guarantee of quality, authenticity and uniqueness.

Consumers’ lack of trust changes the neighbourhood into a safe space and gives particular value to local specialties and traditions.

9. Companies’ role in society is being questioned

Non-grocery eCommerce is growing with 1 million more households buying online in 2020. As a consequence, confidence in using credit cards is also increasing with a use frequency of 2.9 times a month compared to 2.6 in 2019. An increasingly omnichannel path to purchase requires more transparency and simplicity. Brands need to redesign their strategies to enrich the experience they propose to their customers and make it consistent across channels.