For the first time the Ipsos Flair Collection goes to Africa, looking at Ivory Coast. In what is known as the “fastest growing country in Africa”, we analyse its economy, consumer trends, as well as societal changes, including gender inequality and young people turning their back on a traditional lifestyle. Here are the 10 key points for Ivory Coast: 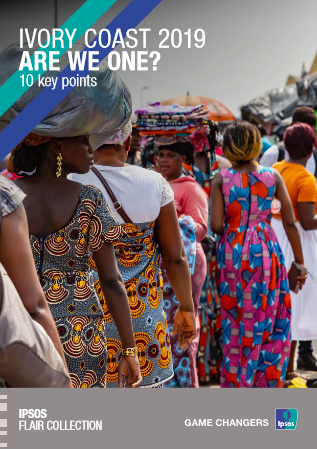 1. Ivory Coast is the central nervous system of francophone africa, whose heart lies at Abidjan

Though Dakar is on the rise, Abidjan remains francophone Africa’s centre of fashion, music, media and digital creation. Abidjan hosts French broadcaster CANAL+’s Pan-African subsidiary channel A+. TV channel VoxAfrica, has recently opened its African offices in Abidjan. French Media group Lagardère Active has just launched two new radio channels in Ivory Coast’s largest city and operates its African content operations from there. Both Sony Music and Universal use their Abidjan recording studios in the race to discover the next African pop star.

Despite recent and recurring crises, the Ivorian economy has been bouncing back over the past seven years. It is now known as the “fastest growing country in Africa”. With a growth of 8% in 2017, Ivory Coast has the 5th highest GDP of the 54 African countries. It posted an average growth rate of investments of 44% in the period 2012-2016. These investments went to Construction first (25%), powered by large infrastructure projects, followed by Technology (17%), Agribusiness (15%), Transportation (13%), and Plastics (5%).

3. However, Ivory Coast must diversify its economy

The fragility of Ivory Coast’s economy has been once more highlighted by a recent 25% fall in cocoa prices (a recurring issue since the 1980s). Cocoa represents 40% of the country’s GDP and the economy is too dependent on this crop’s very volatile price. Ivory Coast’s National Development Plan is mostly based on economic diversification. Communications, finance, construction and transportation are supposed to support economic growth in the future. These sectors should benefit from the country’s growing urban population and the government is trying to attract foreign direct investment towards manufacturing and the transformation of agricultural output.

Rapid growth since 2012 (8% to 9% annually) has had only a small impact on the poverty rate – falling slightly from 48.9% in 2012 to 45%. Today, inflation and wage stagnation, the eviction of entire neighbourhoods under the pretext of sanitation, chronic shortages of water and power, massive unemployment of university graduates, high crime rates, all contribute to a high level of frustration. People are increasingly wondering: who is benefiting from this economic growth? As people locally say: “You can’t just feed people on bridges and tar.”

5. A society of class extremes

Influential families dominate politics and business. Subsequent regime changes have not harmed their entrenched interests in the 60 years since independence. The middle class, which amounts to barely 15% of the total population, resorts to institutionalised mutual help (a feature of African societies) to climb the social ladder and try to break the ‘glass ceiling’. The “upper working class” - low-ranking civil servants, craftsmen shopkeepers - occupies a grey zone between mere survival and economic safety. Their ambition is to join the small, but growing middle class and adopt its habits and values. 40% of the population lives below the poverty line on less than 100,000 CFA francs per month. Unemployment, ill-paid jobs and illiteracy are their lot.

Gender inequalities are still strong. The average income for women is still 59% lower than men. 71% of illiterate Ivorians are women and though women account for 68% of the farmer population, customary law in some parts of the country still denies them a right to inheritance and land ownership. Only 10% of Abidjan university’s 60,000 students are women. More and more Ivorian women are nevertheless deciding to take their destiny into their own hands and breaking free of the shackles of the traditional patriarchal society. One in two Ivorian women (49%) are in official employment, but the actual proportion of working women, including the informal sector, should be closer to 72% overall. One in four of all women (24%) are the heads of their respective households.

7. The Ivorian youth is growing impatient

Young people are turning their backs on traditional lifestyles and values and enthusiastically embracing the internet and social networks. They’re developing a new way of life based on living in the moment and spending. With 78% of the total population under 35, and 15 to 34-year olds accounting for 36% of the population, they are a huge group. This “hurried generation” is looking for a shortcut to affluence. Entrepreneurship, freedom of speech, hedonism, and financial independence define who they are.

8. Ivory Coast is an immigrant country

Ivory Coast is a welcoming country, with many French citizens still living in Abidjan. The 2014 national census found 24% of the total population was foreign-born. Hundreds of thousands of illegal migrants are known to live in Ivory Coast. We have to remember that 86% of all migration flows from Africa take place between two or more African countries and not to or from Africa. This tradition of hospitality is both a factor of strength for the Ivorian economy, whose manpower needs are huge, and a real conundrum as far as the fragile ethno-religious balance of the country is concerned. Identity issues have caused a severe political and social crisis and wounds are healing at a slow pace. Inter-ethnic and inter-faith cohabitation remains one of the major challenges facing Ivorian society today.

In just six years, mobile phones have grown from having 16 to 24.5 million users, the internet from 200,000 to 10 million users, while Facebook users now total more than three million. More than eight million Ivorians own a mobile bank account and daily money transfers amount to more than 15 billion CFA francs. Digitalisation prompted a rapid development of mobile telecommunications and e-commerce. As elsewhere in Africa, digital solutions can compensate for the lack of hardware infrastructures. Ivory Coast’s Virtual University, launched in 2015, seeks to help the country cope with the growing demand for superior education by proposing massive open online courses. It already counts close to 7000 students.

Traditional festivals and cultural events punctuate the year, and their number has only increased as ethnic and religious diversity has risen. Popo Carnaval in Bonoua, Mask Carnaval, Yam Festival, Abissa (Generations’ Festival), Independence Day, and religious festivals like Paquinou, Christmas, Ramadan: all these events spark consumption and business. New events have been more recently added to this calendar: Valentine’s Day, Femua (Festival des Musiques Urbaines d’Anoumabo), Music Day, Grill Festival (sic!), Festival of Arts and Culture. These events present many opportunities for brands to communicate with and get closer to consumers.