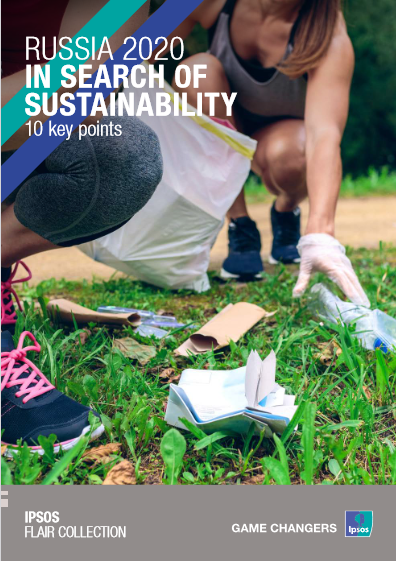 Consumer awareness around sustainability and social responsibility is growing in Russia, encouraged by the influence of public and private organisations. Of the UN Sustainable Development goals, Russians believe the most important are good health and well-being, together with no hunger and poverty. Developing cities and communities tend to focus on industry, infrastructure and saving the environment, such as caring about clean water and sanitation and fighting plastic waste. Brand activism is emerging as an important aspect of advertising in Russia, which is also something that resonates well with Generation Z.

When it comes to changing their behavior, Russians move between the need to demonstrate new habits of socially acceptable responsible behavior such as living healthily and sorting their recycling waste, and actually adopting these new behavioral patterns - which can sometimes be inconvenient. In Russia, as in other places around the world, there is a large gap between recognizing an issue and doing what it takes to solve it. For example, 80% of Russian consumers express concerns about environmental issues while only 47% say they are willing to pay a higher price for products that use ingredients that are not harmful to the environment. People are not ready to sacrifice comfort and instead seek responsible and environmentally friendly habits that fit in with their everyday lives.

3. The changing role of packaging

When healthy lifestyles became top of mind for Russian consumers several years ago, people began to read product packaging labels carefully. But now they go even further, looking for “eco” marks on packaging when sorting their garbage, fitting new socially acceptable patterns of eco-consumption. It turns out that packaging choice has social and ethical dimensions for consumers. Our 2019 Trend Vision survey found 75% of Russians are willing to sort their waste, where separate garbage bins exist. But even when they are in place, there is a lack of understanding of how to do it properly. This is the long-game that the whole country has to play. There is good news, though, as the initiative has strong support from the government.

Russia has discovered “healthy snacking”. In the Soviet tradition, food was consumed “on schedule” at the three main mealtimes of the day, which meant that snacking was altogether absent from Russian eating habits. A new lifestyle which adopts snacks as an important part of a healthy diet has completely changed Russian consumers’ understanding of what snacks should be. According to Ipsos’ RusIndex, sales of packaged snacks have fallen from 54% in 2014 to 44% in 2018, and “grazing”, based on nuts, dried fruits, and fresh fruits and vegetables is becoming increasingly popular.

Being responsible for your own health is becoming the new normal in Russia. It is supported and promoted at both state and corporate levels. We defined four segments of consumers based on their attitudes to personal health, disease prevention, eating and sporting habits. They are: “Health carers” (28%); “Phytocuties” (those who drink smoothies and post pictures of their ideal body shape on Instagram) (13%); “Surviving rationalists” who are focused on their career (31%) and “Family-free and enjoying life” (19%). Brands should decide which of these segments to take as their target audience if they are to get on board with the trend of health importance.

Even though some estimates say that up to 70% of Russians suffer from stress at their workplace, they are in no hurry to worry about mental health. Perhaps because of the historical use of mental institutions to curb non-health-related deviant behaviours in the country, Russia appears to be one of the least tolerant countries towards people with mental illnesses: 76% of Russians believe that the mentally ill should be excluded from public institutions.

Elderly Russians have greater purchasing power and new aspirations. Those aged 60+ aspire to a healthy lifestyle (57%), medical treatment (35%), home or country house (dacha) renovation (20%), travel (19%) and financial investments (12%). Single pensioners show more desires to plan trips (24% vs. 19% overall). Further breaking down stereotypes, 6 in 10 in this age bracket are internet users and 3 in 10 are social network users.

Being active buyers, this group is also leading planet-friendly living and responsible consumption: 59% of the affluent population is willing to change their behavior patterns to contribute to environmental goals, compared to 45% of the urban population of Russia as a whole. They tend to mix brands and products from different price segments and expect brands to be environmentally and ethically responsible. They prefer to spend on impressions, not things.

Moscow has the largest fleet of car-sharing vehicles with around 25,000 and growing. Across Russia, 27 car-sharing companies operate in 15 cities, but the market is far from being saturated – even in Moscow. Several barriers can still be lifted, some of which, as reported by Muscovites themselves, include the responsibility for a rented car after use (50%), inability to end the rental outside strictly defined zones or city limits (38%), and lack of free car-sharing nearby (35%). This is on top of a general lack of knowledge about car-sharing services (33%). The development of car-sharing, the situation for each of these factors will improve naturally, enabling more intensive use of the service across Russia.

10. Trust in brands is at stake

Russian consumers are confused by huge volumes of inconsistent information – about brands’ environmental friendliness and responsibilities and the privacy and security of personal data, to name two examples. Global Advisor study shows that more than 8 in 10 people in Russia agree that companies do not pay enough attention to the environment. Consumers are forced to rethink their attitude to brands: meaning that confidence in brands is in jeopardy, and additional efforts must be made to at least maintain the levels of trust that are already established. The brands that will win are those that will guide and empower the consumer to decide what is “good” and what is “bad” in the new value system of the new responsible world.