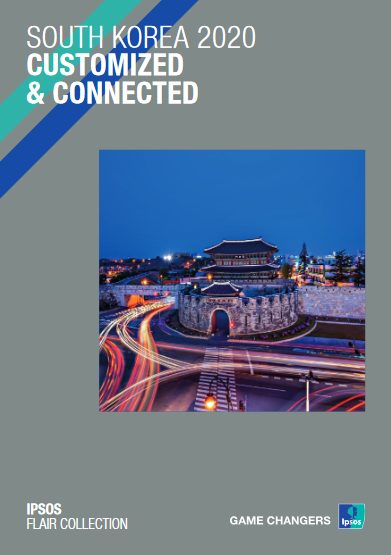 Emerging from a war-torn history and divisive political context, South Korea experienced unprecedented economic growth during the 1960s that earned it the name of the “miracle of the Han river”. Today, the country is known for its technological innovation and cultural influence in music and beauty, spread through the “Korean Wave”.

Flair Korea 2020 encompasses the main trends in Korean society today, from an environmental awareness to healthy ageing and pioneering the sharing economy.

Our local Ipsos experts discuss these trends and interpret them from the perspectives of government, consumers and businesses to give an accurate reflection of the reality of Korea today.

1. South Korea is not just a high-tech factory.

The country maintains the world’s largest share in high-tech manufacturing of products such as smartphones and display screens and was the first in the world to launch a 5G network service. But beyond this appearance, South Korea has long been confronted with towering challenges. While it has managed to forge a new industrialized and democratized status, it endures the constant risk of armed conflict with the Northern half of the peninsula.

Over the past 20 years, the Korean Wave - “Hallyu” in Korean – has swept across Asia and now through the West, playing a part in establishing a positive image of Korea. This began in the entertainment industry – the K-pop boys’ band BTS has become a world-wide phenomenon estimated to have generated over 4 trillion KRW (approx. 3.5 billion USD) per year – but is now expanding into areas such as K-food and K-beauty.

With the high penetration rate of smartphones (at 95% ownership), people are displaying a swift decrease in usage and trust of the four main media channels (TV, radio, newspaper and magazine). Through these emerging channels, even ordinary individuals can wield a degree of influence – as long as they have a sizeable following on social platforms such as Instagram or YouTube.

It has become fairly common today for people to utilize rental services for cars or home electronics and buy and sell second-hand goods through online platforms. Many also use communities to give out or share items for free. However, business models based on sharing are still in the early stages of development and sometimes conflicting interests prevent them from thriving.

5. South Korea is an eco-friendly country.

By introducing measures such as the regulation of single-use products, the government is beginning to influence the daily routines of Korean consumers. Many have voluntarily adopted an eco-friendly lifestyle, striving to decrease waste and disposable products. Upcycling, paper straws, disposable cups and similar environmentally-friendly products and services are gaining widespread interest. And year on year, more people are interested in purchasing, green vehicles and eco-friendly electronic devices.

The desire to possess a strong immune system stems from the constant yearning to maintain healthiness into old age. In some ways, having good health indicates upholding a competitive edge in social life. Older generations fulfill this desire by striving for youthfulness: they dye their hair, wear flashy hiking gear, exercise regularly, and get Botox injections, all in the name of looking young.

With the rise of single-person households and the adoption of a 52-hour working week, consumers are increasingly investing in personal hobbies and self-development. The wellness industry is expanding as more emphasis is placed on leisure, rest, and relaxation. Personal care is a fast-growing segment:. Products used at home are growing by more than 10% every year, and various innovative beauty devices are continuously being launched. Korea is of course where K-Beauty brands started their experiments.

Korean food is traditionally rich in sodium as meals mainly consist of rice, soup, and pickled side dishes. However, many office workers have recently been switching to a salad-based diet; winter sales of salad products have increased by over 200% in a single year. Choosing to follow a vegetable-based diet during the winter season can be interpreted as part of a long-term effort to replenish nutrients and improve health, rather than as a mere method for short-term weight loss. Salad is no longer exclusive to young women and dieters as more and more men are searching for options to the exhausting cycle of alcohol, meat, and fast food.

With 2,150 plastic surgeons, the fifth largest number in the world (first in terms of surgeons per capita), Korea performed over 300,000 cases of facial plastic surgery last year, the third largest number in the world (again, first in terms of cases per capita). These figures reveal an immense level of demand. Cosmetic procedures literally begin from the moment a baby is born. One postpartum care center in Gangnam offers a newborn massage service that claims to mold pointier noses and smaller faces, which are features that are widely considered to be beautiful in Korea.

10. South Korea is a meditative country.

Meditation is part of a certain conception of health which also encompasses factors such as nutrition, emotions, relationships, and the environment. Activities such as walking, and meditation, are the preferred methods used to balance of the body and the mind. In 2019, crowds of people participated in the ‘Han River Meditation Walking Contest’ where they accompanied a meditation leader along a 4km river walk. The event avidly claimed that walking not only strengthens the physical condition, but also helps organize thoughts and control the mind by focusing on the simple rhythm of placing one foot in front of the other.