On the eve of a major conference on the state of British democracy, hosted by King’s College London and Ipsos MORI, new polling and analysis from Ipsos MORI shows that after 11 months of the year, 2014 is on course to have the lowest combined voting share for the Conservative and Labour parties since Ipsos MORI started regular polling in 1978.

2014 has already seen a number of shocks to the British political system, including the Scottish independence referendum campaign, and the election of UKIP’s first Westminster MPs. In polling terms, 2014 has witnessed UKIP take third place in the public’s voting intentions and reach a record high in the monthly Ipsos MORI Political Monitor, the SNP open up a record lead over Labour in Scotland and the Greens equal their best ever performance and match the Liberal Democrats for three consecutive months. In November, just seven in ten said they would vote for one of the Conservatives, Labour, or the Liberal Democrats, down from nine in ten who voted for them in the 2010 General Election.

Our latest analysis suggests this move away from the traditional parties is part of a long-term trend. The average combined vote share for the Conservatives and Labour in the 11 months so far this year on Ipsos MORI’s Political Monitor is just 66%, or two in three voters. As the chart below shows, this has fallen every year since 2011, and taking a longer-term view the average every decade has fallen since the 1990s, from an average of 81% during the 1990s, to 74% during the 2000s, to 71% since 2010. 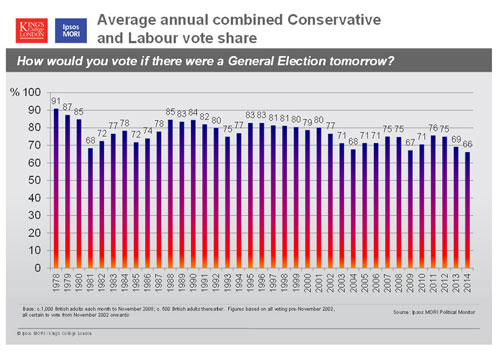 This is not a completely new phenomenon – other low points include November 1981, at the height of the SDP and Alliance, when a record low of just 54% said they would vote for either Conservative or Labour, and April 2010 just after the first leader debates and the start of “Cleggmania”, when the combined vote share for the two main parties was 60%. Nevertheless, 2014 is the first year that has seen their combined vote share fail to reach 70% in any single month so far.

The weakness of the two main parties is carried forward into the public’s expectations for the result in the 2015 General Election. Just 18% expect the election to result in a majority for either the Conservatives or Labour (9% for each), compared with nearly three-quarters (73%) who think there will be a hung parliament (46% with the Conservatives as the biggest party and 27% Labour). This is a rise of 14 points in those expecting a hung parliament from March 2010, when 59% thought that result would end without an overall majority.

Dear Westminster: We need to talk from Ipsos MORI

“With only five months to go, the 2015 General Election is looking as if it will be the closest since 1945. With the two main parties neck-and-neck in the polls, the difficult incumbency of the Conservatives, the insurgency of UKIP, questions over the credibility of Labour and its leadership, the Liberal Democrats’ collapse, the rise of the SNP and the Greens, not to mention the effect of unmodified boundaries, the result of the coming election is incredibly difficult to predict. This evening’s timely event should be fantastic.”

“All the signs are that we are falling out of love with the traditional Westminster political institutions, and there’s a growing consensus among the public that this will be mirrored in a hung parliament next May – despite the traditional British distaste for coalitions which hasn’t gone away. While we have to be wary about claiming there was ever a ‘golden age’ in trust in politicians, what is particularly concerning from our analysis is the clear generational gap, with younger generations stuck at a much lower level of attachment to political parties – suggesting an even more difficult future for the political establishment.”

Technical note Ipsos MORI interviewed a representative sample of 1,011 adults aged 18+ across Great Britain. Interviews were conducted by telephone 8-10 November 2014. Data are weighted to match the profile of the population. Past data taken from Ipsos MORI’s long-term voting intention trends.