New research by Ipsos MORI for housing and homelessness charity Shelter finds 74% of people in younger Generations X and Y of the view that it is harder for them to get a home to settle down in – either as a homeowner or a renter – than it was for their parents’ generation. This compares to only 44% of people born in the Baby Boomer or Pre-War years.

All generations expect the housing situation to get worse for future ones, but Generation Y are especially worried about their own prospects; 40% agree that ‘I worry I may never be able to secure a suitable long-term home’. 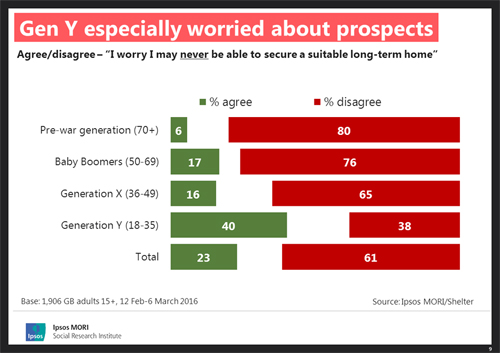 A large majority of people who don’t currently live in a long-term home (one suitable for the long-term i.e. 10 years or more) would like to, either now or in future, with most saying the key reason is to give them stability or to put down roots.

The research marks the launch of the Great Home Debate – the country’s biggest ever conversation about the meaning of home. In its 50th year of striving to end bad housing and homelessness, Shelter, with support from British Gas, is inviting the public to have a say on what makes a good home. It will use people’s views from the Great Home Debate to shape new standards for homes in the 21st century.