The 2017 General Election has been called the Brexit election – but is it? Ipsos MORI data shows that Brexit definitely is one of the dominant issues of this election and on certain key policy issues, attitudes towards Brexit are more of a dividing line than traditional party loyalties.  However, it’s too simplistic to reduce people’s motivations down to any one single issue, and the Conservative/Labour divide isn’t dead yet.

Our analysis of how people voted in the EU referendum compared with their support for the two main political parties shows that on some issues people are more united by whether they voted Leave or Remain rather than whether are a Conservative or Labour supporter.   On immigration, the pressure it creates on jobs and public services, distrust in globalisation, and scepticism towards experts, whether you are a Leave or Remain voter seems more important than traditional party identity.

Conservative Leavers are also more similar to Labour Leavers (and Conservative Remainers to Labour Remainers) when it comes to a sense of nostalgia for the past and an anxiety about how Britain is changing. 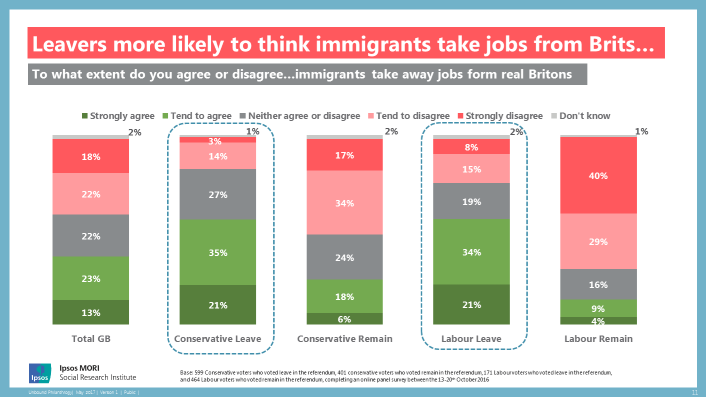 But traditional political party lines are still clearly defined in other areas. Labour supporters on both sides of the Brexit vote feel more “left behind” than Conservative supporters.  Labour voters are also more likely to feel affected by austerity, say they are struggling financially, think life is getting worse, and believe that the economy is rigged towards the rich and powerful.  Labour supporters want more income equality and are most proud of the NHS whereas Conservative supporters (both Leavers and Remainers) think income inequality is acceptable to reward differences in talent and effort, and say they are most proud of Britain’s history and democracy. 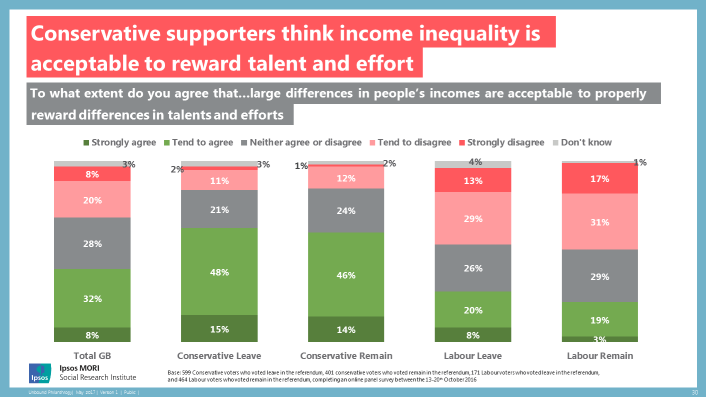 Our analysis also highlights a set of issues where there is an interaction between both party support and how people voted in the EU Referendum. There is a gradient that runs from Conservative Leavers to Labour Remainers where Conservative Leavers are most opposed to political correctness, gay marriage and support for the death penalty whereas at the other end are Labour Remainers who hold the opposite view, and are most supportive of the collective provision of welfare.

All this suggests that in the long term - particularly as the decisions leading up to Britain’s post-Brexit future get tougher – this will make it harder for both main political parties to find messages that appeal to all their supporters. More immediately, however, these findings present more of a challenge for Labour - where the views of its Leave voters are much closer to the Conservatives on issues such as immigration.