A new survey by Ipsos MORI shows the work of the NHS has not gone unnoticed by the British public, with around 8 in 10 viewing NHS workers such as doctors, nurses as good role models, more than any other group given in the survey.

Strong majorities of Britons view both teachers and members of the armed forces as good role models. Seven in 10 (70%) say teachers set a good example while two-thirds (66%) say the same for members of the armed forces. Despite some recent criticism, the police continue to be viewed as a good role model for the majority of the public (54%), however this falls to 42% of Britons from ethnic minority groups and 44% of 18-24-year olds, and 38% in London. 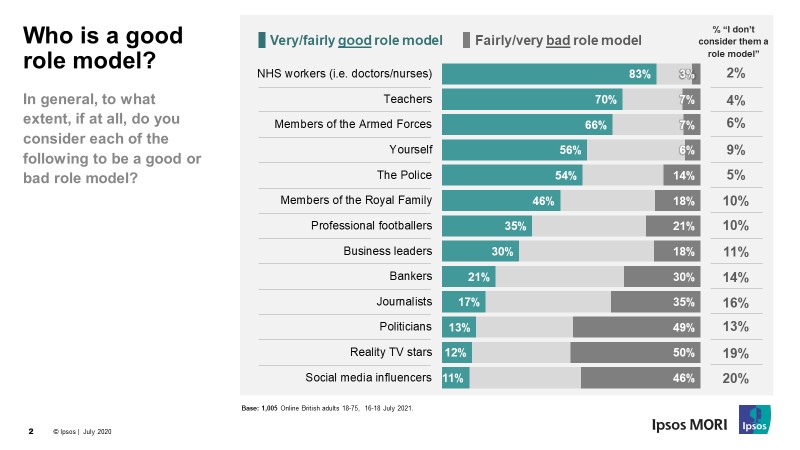 More than half of Britons see themselves as good role models, 56% say they set a good example. However, only 38% of 18-24s feel this way about themselves, self-confidence is higher among those aged 35 -75 (61%).

Just under half of Britons (46%) view members of the Royal Family as good role models, while almost 1 in 5 (18%) disagree. Two-thirds of Conservative Party voters (65%) are favourable to the Royals, but 18-24 year olds are split in their views.

Other professions have work to do to change the way they are seen by the public. Bankers, journalists, politicians, reality TV stars and social media influencers are all more likely to be seen as bad role models than good. While 1 in 5 (21%) see bankers as positive influences, 3 in 10 (30%) see them negatively. Similarly, 17% view journalists positively while over a third (35%) disagree.

Half (49%) of Britons say politicians are bad role models to the public, increasing to 57% of Labour Party voters while 39% of Conservative voters say the same (although that is more to do with a difference in neutral scores – they are no more likely to be positive).

Along with politicians, reality TV stars and social media influencers are least likely to be seen as good role models by Britons. Just over 1 in 10 see reality stars as people to look up to (12%), half disagree. Similarly, despite their role as “influencers”, only 11% are likely to see social media stars as good role models while 46% say they are bad.  In both cases, though, there is a clear difference by age.  Around one in five of those aged 18-44 (17% and 19% respectively) see these groups as good role models, compared with just 5% of those aged 45-75.

It’s no surprise to see Britain’s public sector workers being held up as strong role models, particularly after their incredible work during the pandemic, nor to see politicians at the other end of the table.  But this research also reminds us that not everyone sees potential role models in the same way, with differences by age and other factors such as ethnicity and party support on many attitudes.