In a unique survey, Ipsos MORI is interviewing a longitudinal panel of respondents on their attitudes to immigration throughout and after the election campaign. This will provide a much more detailed understanding of how and why views change than traditional snap-shot surveys.

We have also interviewed an unusually large sample of the public (over 4,500 for the first wave and over 3,700 for this second wave), which allows us to look at smaller sub-groups, including followers of all key parties.

Six key findings from this latest wave are outlined below.

1. Only 15% of the public say their party completely reflects their views on immigration…

Only a small minority of the public (15%) think the policies from the party they support completely reflects their views on immigration.

But this varies between parties, with only 8% of Conservative supporters thinking their party completely reflects their views, up to 46% for UKIP supporters.

And much larger proportions think their party reflects their views to “some extent”, although for each party except UKIP, around one in five of their supporters say their party does not represent their views very much or at all. 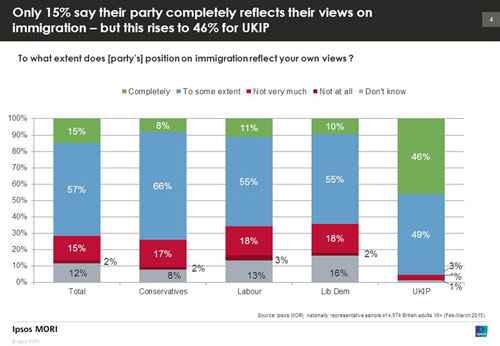 2. There are different reasons why the public think the parties don’t reflect their views on immigration: the Conservatives are seen as not tough enough by their supporters, while Labour’s policy is unclear to their supporters…

We followed up those who said their party did not fully reflect their views on immigration to ask why.

And the reasons for this lack of connection are very different: Conservatives policies are relatively clear to their supporters, with only 28% saying they are not clear – but 61% say they are not strong enough.

It is a very different pattern for Labour, with over half (52%) of their supporters not clear what the policies are, and only 32% thinking they are not tough enough.

Perhaps surprisingly among half of UKIP supporters who say UKIP policies don’t completely reflect their views, 35% say they’re not clear what they are, and half don’t think they are strong enough.

Hardly any supporters of each party think their parties’ policies are too tough. 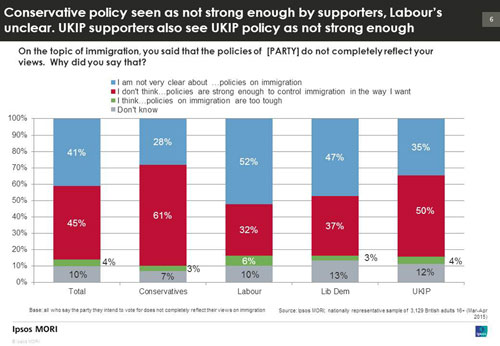 3. Most think that David Cameron was wrong to set a target to reduce net migration to tens of thousands

Six in ten of the public (60%) believe that David Cameron should not have set targets on net migration figures, because this was something he couldn’t completely control.

But this view splits clearly along party lines, with 51% of Conservative supporters defending the Prime Minister’s target.

Those intending to vote Labour are the most negative about the targets, with three-quarters (75%) saying he shouldn’t have set them, followed by 68% of UKIP voters.

Mr. Cameron also gets little backing from supporters of his Coalition partners, with 66% of Lib Dems also saying he shouldn’t have set targets. 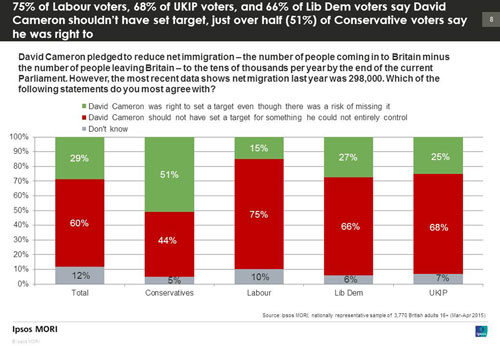 But this link between our EU membership and control of immigration is a very clear dividing line between supporters of different parties: most Conservative (61%) and UKIP (92%) voters support the idea of taking complete control of our borders, even if it means leaving the EU. Most Labour (57%) and Lib Dem (64%) voters take the opposite view. 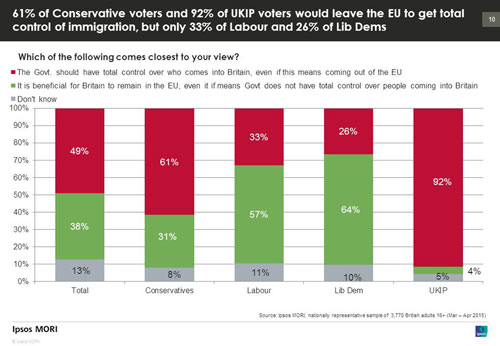 5. But this doesn’t translate into similar proportions thinking UKIP has the only credible plan for reducing immigration

Half (51%) disagree that UKIP is the only party with a credible plan for reducing immigration, including 35% who strongly disagree - although 29% do agree.

As you might expect, UKIP supporters have a very different view, with 85% agreeing that UKIP has the only credible plan. Lib Dem supporters are the most likely to disagree (66%). 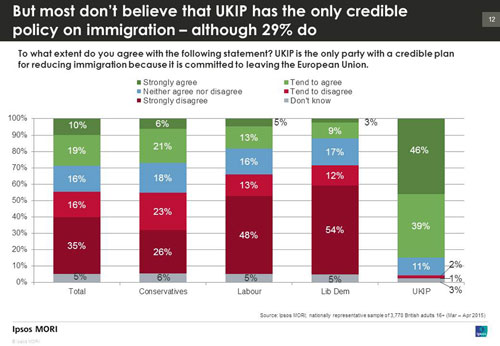 6. The election campaign has done little to satisfy the public when it comes to talking about immigration – and only a minority have noticed any discussion of immigration

Fewer people believe immigration has been discussed ‘too much’ since the election campaign started: 22% think that immigration is being discussed too much – down from 27% when our respondents were asked a similar question in late February/early March.

There is again wide variation between supporters of different parties, with 68% of UKIP supporters thinking it has been discussed “too little”, 45% of Conservatives, 25% of Labour supporters and 22% of Lib Dems. 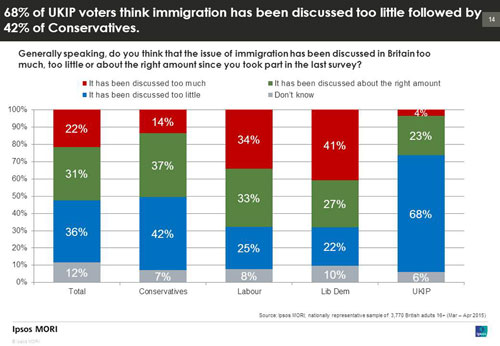 And only 23% remember seeing any media stories or political statements on immigration during the campaign period, which is pretty consistent across party supporters, although Lib Dem supporters are slightly more likely to say they have seen immigration stories. 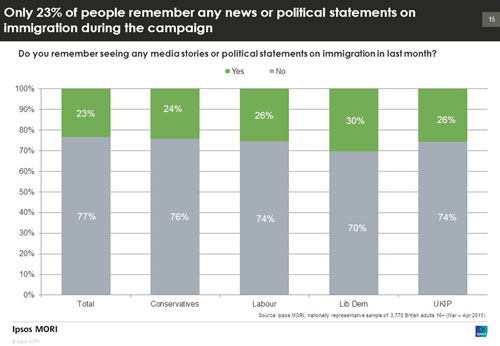 'There has not been as much focus on immigration during the election campaign as some may have expected, given its importance as a national issue and prominence at the 2014 European elections. But this is understandable given the position of the different parties. The Conservatives have lost their lead in our measures of the “best party” on immigration, and will view any focus on it as helping UKIP. Labour have a difficult line to tread, with polarised views among their supporters from very concerned to very relaxed. This has left UKIP struggling to keep the attention on the issue, and they have themselves also had to broaden their appeal beyond immigration and our relationship with Europe. News stories of tragic events in the Mediterranean have also shifted the tone of media discussion. This has left the national debate on immigration in stasis – but it will need to be returned to after the election. It is still one of our most polarised debates, and linked to big decisions that are going to need to be made, particularly on our position in Europe. We will be conducting one more wave of our longitudinal study before the election, and a further wave after the election, to help provide some insight into how public opinion has changed, and where it could go next.'

For this second wave of the longitudinal study, Ipsos MORI interviewed a representative sample of 3,770 British online adults aged 16+ years between 27 March and 7 April, supported by funding from Unbound Philanthropy. Interviews were conducted on Ipsos’ online panel and results have been weighted by demographic factors to represent the British population.