Public support for the third round of the junior doctors’ strike is as high as it was for the first two strikes in January and February, new polling from Ipsos MORI for BBC News has found. The survey of 860 adults in England finds the same proportion (65%) supporting junior doctors strikes as for the previous round of action in February (66%) – as long as emergency care is provided. Opposition to junior doctors striking has decreased by five percentage points to 17% compared to last month. 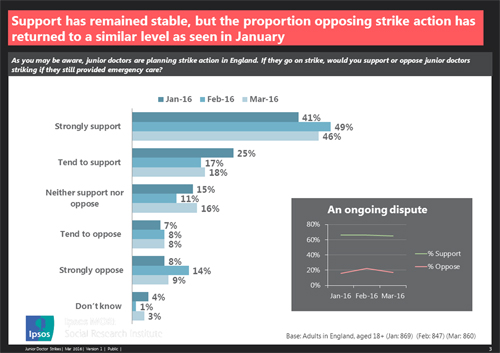 The new figures are published as doctors prepare to strike for a third time, and show that the government continues to bear much of the blame for the ongoing dispute. A majority (57%) say that the government is more at fault for the dispute continuing this long, down from 64% in February, and the number saying the junior doctors are more at fault is still low at 11% (13% in February). However there has been a ten percentage point increase in the proportion saying that the doctors and the government are both equally at fault (28%) since last month. 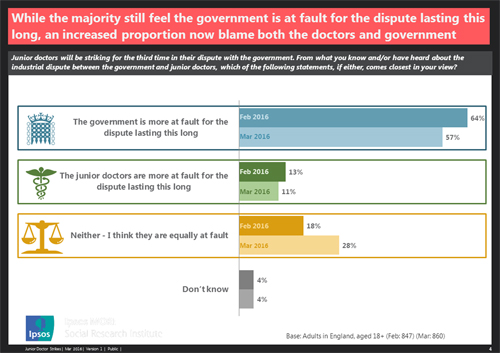 “Today’s findings show that public support overall is resilient despite the ongoing nature of the junior doctors’ dispute over their contracts, and the fact that this round of strikes is set to last twice as long. For the majority the blame for the protracted dispute still squarely lies with the government, but that may not last indefinitely. There’s been a sizeable increase in the number of people who see both the government and the doctors as being culpable and the doctors shouldn't rely on an endless supply of public goodwill.”