“I think it's time we now have a proper, public debate so that the public can listen to the two sides of the argument and judge for themselves” Nick Clegg, BBC, 5th March 20141

On Wednesday Nick Clegg and Nigel Farage took part in the second live debate in a week on whether Britain should remain part of the European Union. The party leaders had previously hailed the debates as a ‘fantastic opportunity’ to inform the British public and help them decide whether they would be better off ‘in’ or ‘out’, but what did the public make of it all? Snap polls announced immediately after the debate called a ‘victory’ for Farage, but what did this ‘victory’ look like? In partnership with Demos and the University of Sussex, Ipsos MORI took a new, innovative approach to try and uncover what viewers really thought about the ‘performance’.

Using natural language processing technology and machine learning we were able to analyse over 68,000 tweets in real time during the debate; more about the method can be found here2. The Twittersphere cannot claim to be representative of the general population (only 15% of us have accessed Twitter over the last three months, over half of users are aged under 35, and they are more likely to be from AB and C1 backgrounds3); but it does allow us to capture in-the-moment reaction, and give us insight into a set of uncensored attitudes that have not yet been rationalised by respondents. There is clear value in using this technology to gather insight into how people engage with and talk about key issues. So what did we learn?

Overwhelmingly, reaction on twitter focused on the personalities rather than the policies that frame the in/out debate. 72% of tweets passed comment on the clothes worn, the jokes made, Nigel Farage’s sweat, the style in which the debate took place, and judgements of character such as ‘trust’; just 22% of tweets focused on the economic, social and political arguments for and against.

Due to the low volume, it proved too difficult to establish a clear pattern of a live pro-EU vs anti-EU sentiment. Despite having tuned in to watch, 40% of tweets posted ‘ridiculous’ or flippant comments; only 58% passed more serious judgement.

On one level, our assessment of positive tweets mirrors the snap polls released after the debate with Farage picking up 75% of the positive tweets posted about either candidate; however, it may be too simplistic to identify that as a ‘victory’. There was very little difference in unpopularity between the two, with negative tweets outnumbering positive tweets by eight to one across both candidates. Farage may have secured a more positive reaction compared to Clegg when viewers were given the choice between the two, but he was some way off securing an overall positive reaction from viewers on Twitter.4 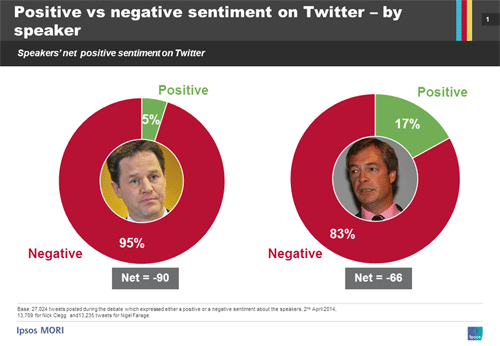 Did the debates succeed in engaging the public in a proper, open debate about the issues? On the evidence from our social media analysis it would suggest not. The Guardian/ICM poll found that only 16% of viewers would change their vote on the basis what they heard during the debate; 69% had already made up their mind. In reality, the debate was more about style than substance – and Nigel Farage didn’t so much win as lose less badly than Nick Clegg.

We’ll be conducting further social media analysis over the coming weeks to track how the debate evolves ahead of the EU elections in May.