Ipsos MORI’s latest Political Monitor shows economic optimism continuing its decline since last summer, to reach its lowest level since April 2013. A quarter of Britons (26%) believe the economic condition in Britain will improve over the next 12 months. This compares to two in five (39%) who think it will get worse, and 31% who believe it will stay the same. This gives an overall Economic Optimism Index score (% improve minus % get worse) of -13. 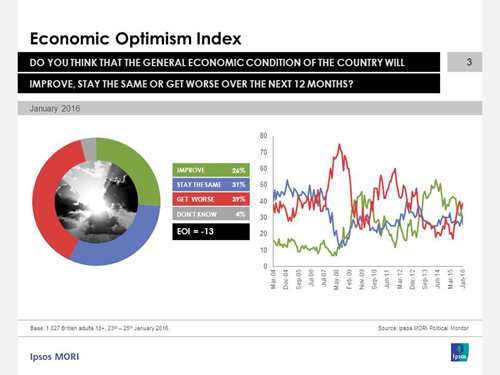 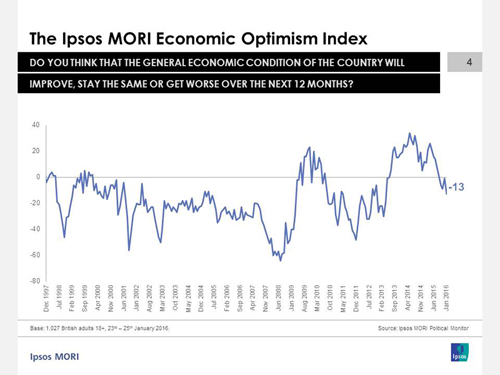 Our 2016 predictions poll last month also showed concern about the economy’s future. Three in five (60%) expected mortgage interest rates to rise, 36% that unemployment would rise, and only 22% thought that their own standard of living would improve.

“For two years, from the summer of 2013 to the aftermath of last year’s election, Britons were more hopeful than worried about the economy, and that clearly played a key part in the Conservative victory. But that started to decline in the autumn, and now with stories about a global slowdown in the news, we are starting 2016 in a much more pessimistic position.”

Technical note Ipsos MORI interviewed a representative sample of 1,027 adults aged 18+ across Great Britain. Interviews were conducted by telephone 23-25 January 2016. Data are weighted to match the profile of the population.