Economic concerns, both personal and general, continue to dominate, along with race/immigration

In April’s Economist/Ipsos MORI Issues Index, 36% of the public mention the economy amongst the most important issues facing Britain – matching the score from last month.  However this remains the lowest percentage to do so since June 2008, a time when concern was increasing as a result of the financial crisis. 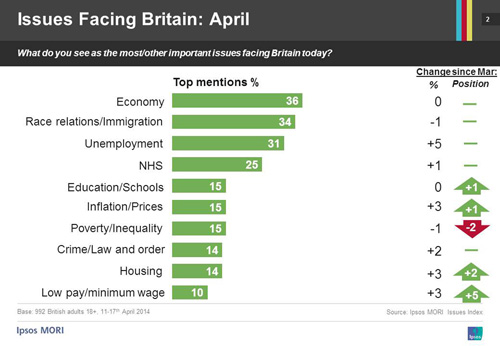 While 36% mention the economy, generally, a similar percentage (34%) mention at least one of four issues relating to the economy in specific areas; poverty/inequality, low pay,  prices/inflation and petrol prices/fuel. The first three of these feature amongst the top ten issues this month. 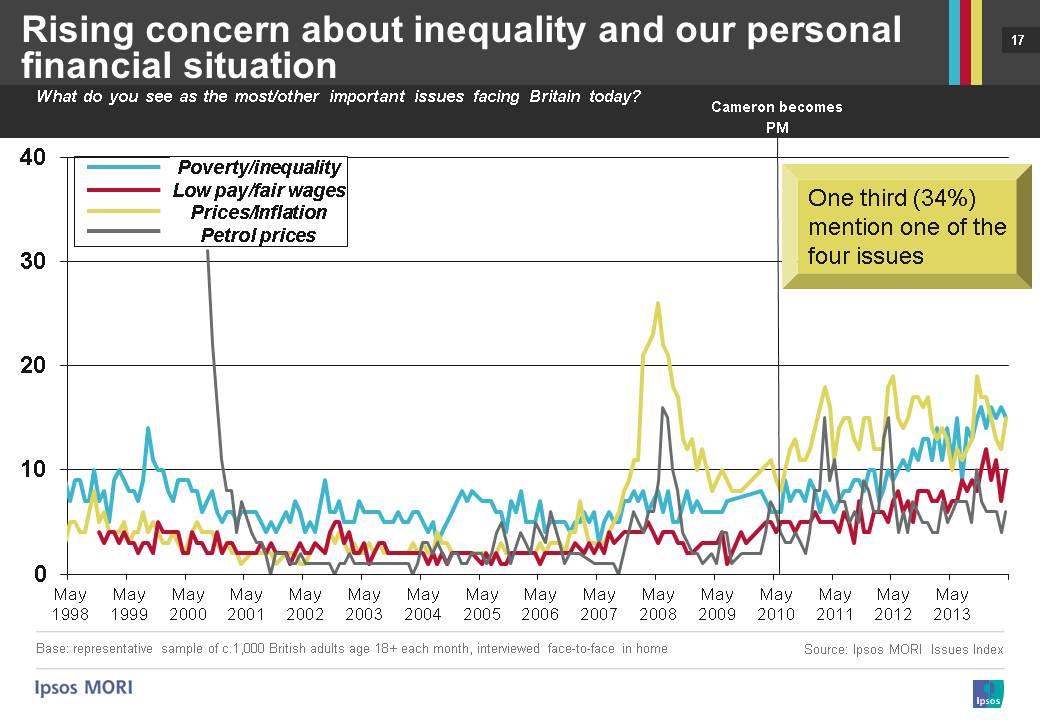 Men are more likely than women to mention one or more of these issues relating to the personal economy (37% vs 31% respectively) as are those aged 35-44 compared with those aged 55+ (41% and 29%). These issues are also much more pronounced in London (53%) compared with the surrounding South East, (28%).

Interestingly, there is no significant difference by social grade, though there is by party support – 44% of Labour voters mention one or more of them compared with a quarter (25%) of Conservative voters. Ed Miliband, writing recently in the Independent, continues to assert the challenges posed by the ‘cost of living crisis’, and our recent political polling indicates that four fifths agree that such a crisis exists.

A third (34%) mention race relations/immigration – and this issue is the most important facing Britain for many sub-groups, most notably women, C2DEs, and those aged 55+.

A quarter (25%) mention the NHS, meaning that the top four issues have remained the same for 16 consecutive months.

Ipsos MORI's Issues Index is conducted monthly and provides an overview of the key issues concerning the country. Ipsos MORI interviewed a representative quota sample of 992 adults aged 18+ across Great Britain. The questions are spontaneous - i.e. respondents are not prompted with any answers.  Ipsos MORI's Capibus vehicle was used for this survey. Interviews were conducted face-to-face in-home between 11th-17th in 191 sampling points across Great Britain. Data are weighted to match the profile of the population.