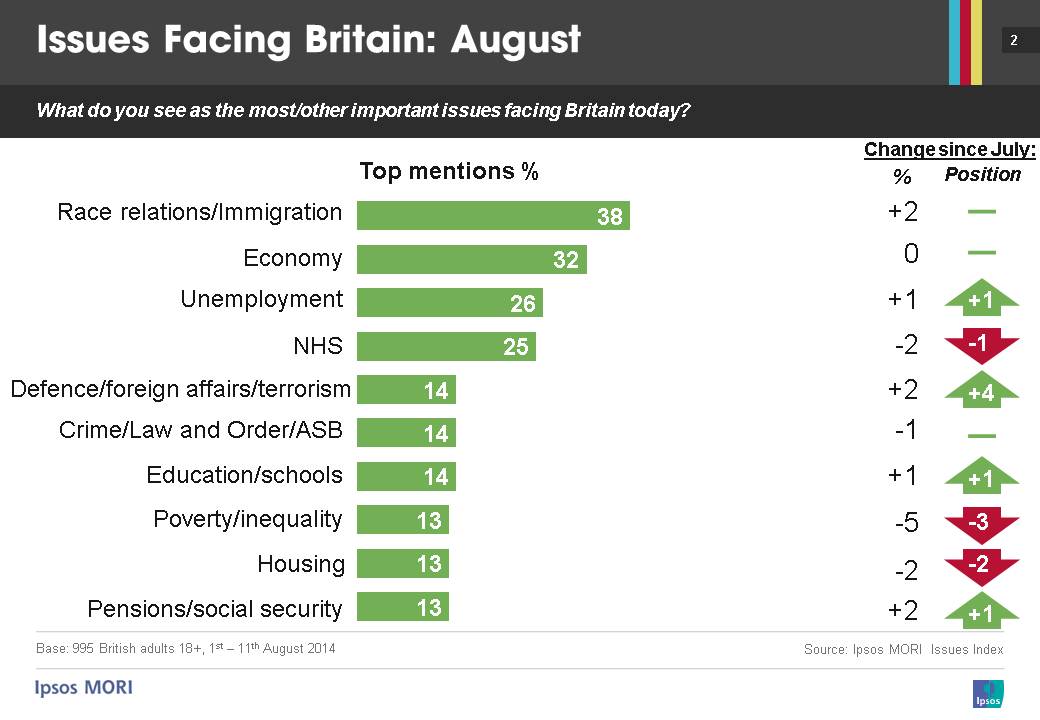 As with last month, three in ten (32%) mention the economy, the issue that dominated our issues index during 2008-2013, and one that has been steadily declining since then. A quarter (26%) mention unemployment, however this is an issue whose salience varies according to age and social grade – it is mentioned by a third (33%) of those aged 18-54 in social grade C2DE. Indeed, for them, it is the most important issue facing Britain today – ahead of both race/immigration and the economy.

The same proportion overall (25%) mention the NHS, rising to 33% of ABC1 respondents aged 55+. These four issues have remained at the top for nearly two years, since November 2012.

One in seven (14%) mention defence/terrorism/foreign affairs, though the fieldwork was conducted before the recent murder of journalist James Foley in Iraq. The same percentage mention crime/law and order, and education, and 13% mention poverty/inequality, housing, and pensions/benefits.

Ipsos MORI's Issues Index is conducted monthly and provides an overview of the key issues concerning the country. Ipsos MORI interviewed a representative quota sample of 995 adults aged 18+ across Great Britain. The questions are spontaneous - i.e. respondents are not prompted with any answers.  Ipsos MORI's Capibus vehicle was used for this survey. Interviews were conducted face-to-face in-home between 1st-11th August in 181 sampling points across Great Britain. Data are weighted to match the profile of the population.