Concern about the economy continues to fall, and once again it is neck and neck with immigration

In this month’s Economist/Ipsos MORI March Issues Index, 36% of the public mention the economy amongst the most important issues facing Britain – a fall of three percentage points since last month, and the lowest percentage to do so since June 2008, when concern was increasing as a result of the financial crisis. 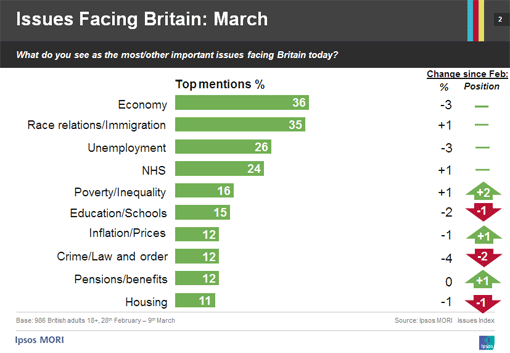 Indeed, looking at the results from one year ago, over half of the public were concerned about the economy, and it had a clear lead over the other issues.Today, however, this lead has all but vanished. 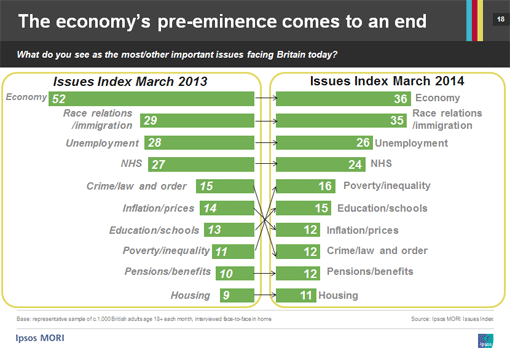 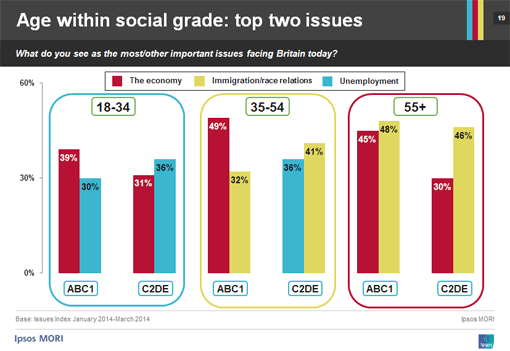 A similar percentage (24%) mention the NHS, meaning that the top four issues have remained the same for 15 consecutive months.

16% are concerned about poverty/inequality, equalling the highest score we have ever recorded for this issue – indeed, this issue is now the fifth most important issue facing Britain. Those who are most concerned include Labour voters (22%).

Ipsos MORI's Issues Index is conducted monthly and provides an overview of the key issues concerning the country. Ipsos MORI interviewed a representative quota sample of 986 adults aged 18+ across Great Britain. The questions are spontaneous - i.e. respondents are not prompted with any answers.  Ipsos MORI's Capibus vehicle was used for this survey. Interviews were conducted face-to-face in-home between 28th Feb –9th March in 162 sampling points across Great Britain. Data are weighted to match the profile of the population.