Concern about the economy increases to highest level since the election, especially among the middle classes, residents of the South East and high earners

Meanwhile, worry about crime/law and order falls for the second successive month after the riots

The October Economist/Ipsos MORI issues index shows that almost seven in ten (68%) are concerned about the economy, an increase of nine percentage points since September, and the highest level since the coalition came to power in May last year.

Fieldwork was carried out after the debates about economic policy during the party conferences and during heightened concern about the crisis in the Eurozone. The biggest rises in concern this month have been among the better off in society; the middle classes, those on higher incomes, broadsheet newspaper readers, and residents of the South East (excluding London).

A quarter (24%) are concerned about both crime, and race relations/immigration. This is the second month in which concern about crime has dropped, following the riots in August, when concern reached 31%. October fieldwork coincided with the passing of the NHS reform bill in the Lords and concern about the NHS has risen by four percentage points, a fifth (21%) mention this issue. 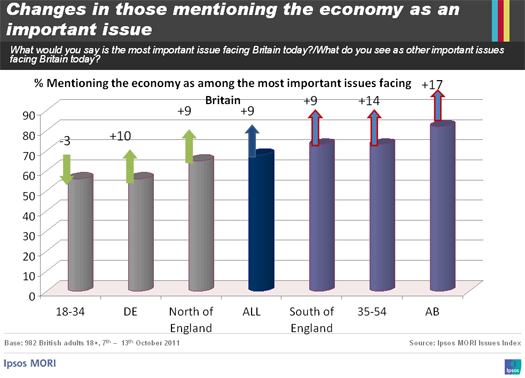 Technical note Ipsos MORI's Issues Index is conducted monthly and provides an overview of the key issues concerning the country. Ipsos MORI interviewed a representative quota sample of 982 adults aged 18+ across Great Britain. The questions are spontaneous - i.e. respondents are not prompted with any answers.  Ipsos MORI's Capibus vehicle was used for this survey. Interviews were conducted face-to-face in-home between 7-13 October 2011 at 156 sampling points across Great Britain. Data are weighted to match the profile of the population.