Economy and immigration key issues for Britons in the EU referendum

With just two months to go until Britain decides whether it will remain a member of the European Union or leave, Ipsos MORI’s latest Political Monitor reveals the economy and immigration to be the most important issues for the public when deciding how to vote. One in three (32%) say the impact on the economy will be very important in helping them decide how to vote, just ahead of immigration which was mentioned by 27%.

When looking further into these figures there is a clear difference on what issues are most important between those that want to remain in the EU and those who want to leave. Two in five (40%) of those who will vote to remain say the economy is very important to them while 14% say immigration. This compares to one in five (21%) of those voting to leave mentioning the economy and almost half (47%) saying immigration. Other important issues for the public include Britain’s ability to make its own laws (14%, rising to 25% of leave supporters), the cost of EU immigration on the welfare system (12%), Britain’s ability to trade with other EU countries (11%), and the impact on British jobs (11%). 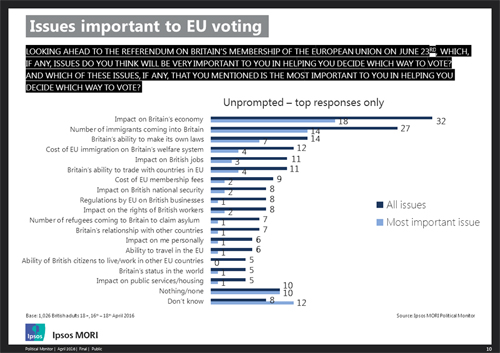 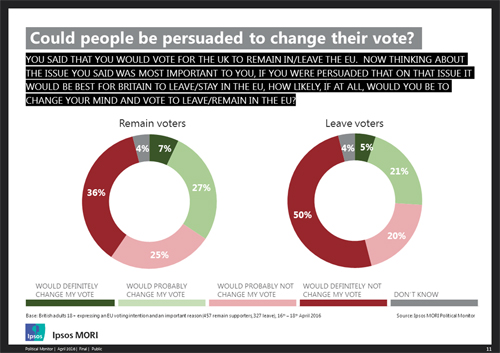 The poll also shows remain keeping a lead over leave. Half (49%) of Britons say they will vote for Britain to remain in the European Union on 23 June, and two in five (39%) say they will vote to leave. The figures show little change from last month where remain was at 49% and leave on 41%. Again, when taking turnout into account, the lead narrows to six points (after applying the same turnout filter that would have given us the most accurate results in the 2015 general election, although it is important to note that turnout at the referendum may well be different from turnout at a general election, and predicting turnout remains a key issue). 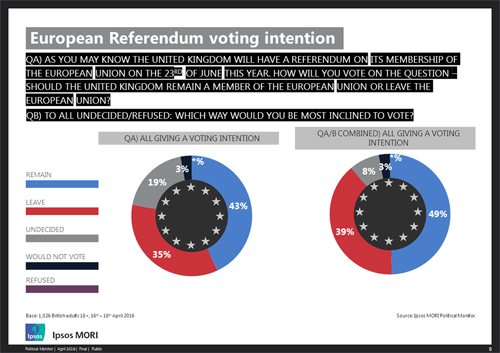 Our ongoing vote intention figures show the Conservatives still holding a slight lead over Labour. The Conservatives currently stand at 38% compared to Labour with 35%, the Liberal Democrats at 6% and UKIP at 11%. Meanwhile economic optimism has improved slightly, with 25% expecting the economy to improve over the next year (up two points), and 33% expecting it to get worse (down seven), giving an Economic Optimism Index rating of -8.

“Remain holds its lead, with the economy still top of the agenda, especially to those wanting to stay in. But the flipside is that remain supporters say they are more persuadable to change their vote based on what’s best for the economy than are leave supporters on their key issue of immigration.”

Technical note Ipsos MORI interviewed a representative sample of 1,026 adults aged 18+ across Great Britain. Interviews were conducted by telephone 16-18 April 2016. Data are weighted to match the profile of the population.