Londoners, young people, women and Labour voters are most likely to think the airstrikes will Britain less safe. 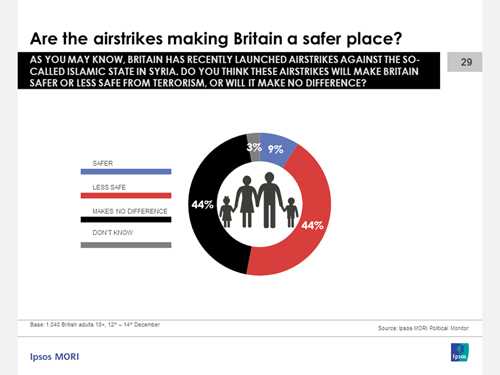 The public are also evenly split on Hilary Benn following his speech during the Syria parliamentary debate. Thirty-five percent say they are satisfied with the Shadow Foreign Secretary while 36% are dissatisfied, and 29% are unsure. Hilary Benn does slightly better among Conservative voters (48% satisfied) than Labour voters (31%). 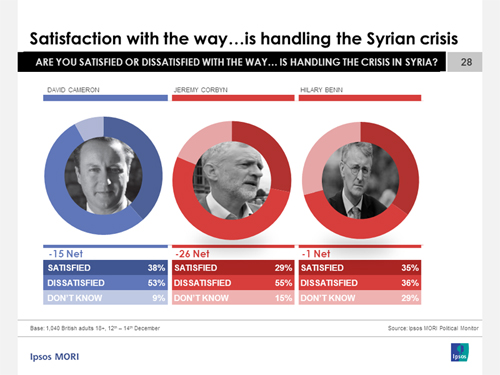 The public are still yet to become familiar with Liberal Democrat Leader Tim Farron with one in four (24%) satisfied, 31% dissatisfied and 45% saying they don’t know. When it comes to Nigel Farage one in three (33%) Britons are satisfied with him doing his job as UKIP leader and just under half (48%) are dissatisfied. 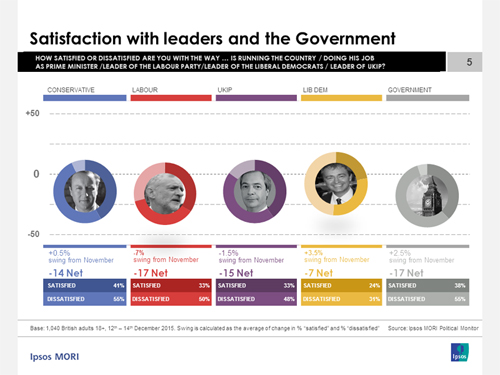 Economic optimism has slightly improved from November following George Osborne’s Autumn Statement announcement. One in three (34%) believe the economy will improve over the next 12 months (up three points) while 35% believe it will get worse (down five points), giving an Ipsos MORI Economic Optimism Index of -1. 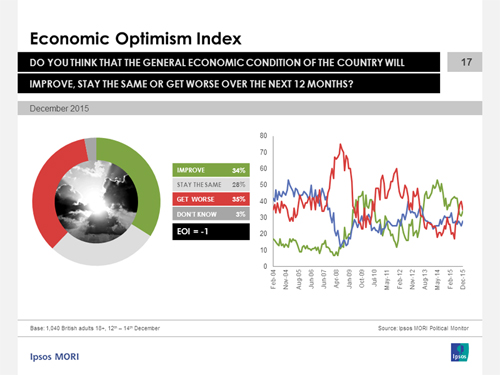 “We know the public are more worried than before about the threat of a terrorist attack, and few are convinced that the air strikes will make Britain safer – although they are divided on whether it will actually make Britain more of a target. Satisfaction with the way the party leaders are handling the crisis splits broadly on party lines, although Hilary Benn gets higher ratings among non-Labour voters. Meanwhile, our long-term trends on overall satisfaction ratings show it’s not unusual for opposition leaders to find it hard to get through to the public – but Jeremy Corbyn is dividing opinion more quickly than most, and has clearly taken a hit in his scores this month.”

Ipsos MORI interviewed a representative sample of 1,040 adults aged 18+ across Great Britain. Interviews were conducted by telephone 12-14 December 2015. Data are weighted to match the profile of the population.