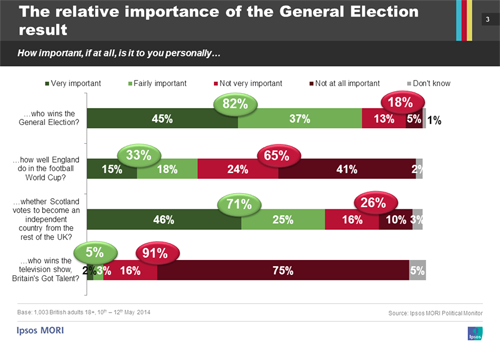 The election though holds less importance for young people, with just a third (35%) of 18-34s finding who wins the next general election very important, compared with 44% of 35-54s and 53% of those aged 55+. Liberal Democrats also say the election result is less important to them; just a quarter (24%) of Liberal Democrats find it very important who wins, compared with 51% of UKIP and Conservative supporters and 57% of Labour supporters. Despite saying the election result is important to them, only a quarter (23%) think it will make a big difference to their lives personally who wins the next general election, however. Four in ten (42%) say it will make ‘some’ difference to them, and another third (33%) little or no difference. Further, on three key measures to the public (immigration, taxation and living standards), many think that there will be little change under either a Labour or Conservative government. Around half of the public think the number of immigrants (52%), the amount of tax they pay (52%) and their living standards (56%) would stay the same under a Conservative government, with similar figures for Labour (49% for immigrants, 43% for tax and 56% for living standards). 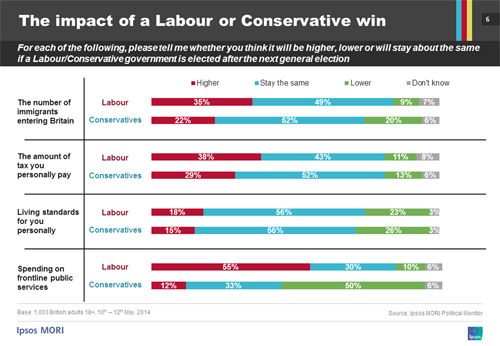 “It seems we have an exciting – and unpredictable – year ahead to the general election in May 2015, and the result is already as important to the public as we normally see at the height of an election campaign. At the same time though, both the main parties have a challenge to convince the public that they really can make a difference to their day-to-day lives, whether that is on taxation, immigration or living standards.”

Technical note: Ipsos MORI interviewed a representative sample of 1,003 adults aged 18+ across Great Britain. Interviews were conducted by telephone 10th – 12th May 2014. Data are weighted to match the profile of the population.