Britons think Europe is on the wrong track and expect anti-European movements to do well in upcoming elections, but prefer staying in EU and reducing its powers to leaving outright

Britons not the most critical, but among most likely to want to reduce EU’s powers or leave outright

In the wake of Ed Miliband’s recent speech on Europe, the latest Ipsos MORI European Pulse, tracking the sentiment of over 8,000 online citizens in ten European countries (Belgium, France, Germany, Great Britain, Hungary, Italy, the Netherlands, Poland, Spain and Sweden), suggests that the most popular option among Britons is a long term policy of staying in the European Union but reducing its powers (mentioned by 40%), followed by leaving the EU (28%). This compares with 18% who want to leave things as they are, 8% who want to stay in the EU and increase its powers, and 5% who want to work for the formation of a single European government.

Across the ten countries as a whole relatively few people want to leave the European Union outright (18% on average), but the single most popular option remains staying in the EU but reducing its powers (34%). Just over a third want to see either the EU’s powers strengthened further (19%), or even a long-term policy of working towards a single European government (also 18%).

However, there are significant differences by country. The British (68%), along with the Swedes and Dutch (69% and 68% respectively) are most in favour of leaving or reducing the EU’s powers, and they are also the most likely to think that anti-European movements will win the next European elections in their country (56% in Britain, 60% in Sweden and 57% in the Netherlands). 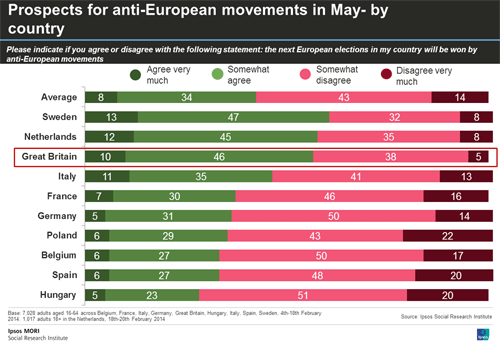 On the other hand, around half of people in Hungary (54%) and Germany (48%) want to see either an increase in the EU’s powers, or the formation of a single European government. These proportions are similarly high in Italy (49%) and Spain (48%), even though these countries are among the most critical of the EU on other aspects.

The research suggests that on average two in three (68%) think things across the European Union are moving in the wrong direction. Britons are in line with the average, with 67% feeling things across Europe are on the wrong track, in line with people from the Netherlands, Sweden and Belgium.

Pessimism is highest in Spain, Italy and France, where around three in four (76%, 77% and 77% respectively) think Europe is on the wrong track, and lowest in Poland, Hungary, and Germany, where 61% feel the same.

However, in six of the countries (Poland, Hungary, Belgium, Spain, Italy and France) people are even more concerned about the direction their own country is moving in. Only in Germany, Britain, and Sweden are people more optimistic about their domestic situation. In Britain 41% think their country is heading in the right direction, compared to 33% who feel the same about the European Union as a whole.

Most people across the ten countries believes the European Union plays a very important role in crucial policy areas, especially the economy, agriculture, and laws and regulations where around eight in ten feel it has influence over their country. Again, there are differences by country – for example the Spanish are the most likely to feel that the EU has influence over the economy, jobs, and the finances of their government, while the British, Germans and Poles are particularly likely to stress the influence the EU has over immigration.

On balance, people feel that the EU’s impact has been more negative than positive across all of these policy areas. They are particularly negative about its influence on their government – its finances and its ability to make decisions in the best interests of the country – but less so about its impact on people’s daily lives.

Britons are the most likely of the ten countries to think the EU has at least some influence over immigration (87%) and laws and regulations (85%, the same as Germany), and are only behind the Spanish in their perception of the influence the EU has on the ability of the government to make decisions in the best interests of the country (73%). In line with most other countries, the general perception in Britain is that the impact of the EU has been negative on these issues, especially on immigration (70% negative impact) which is the top concern here – although others in Italy and France are even more critical on this (both 77%). 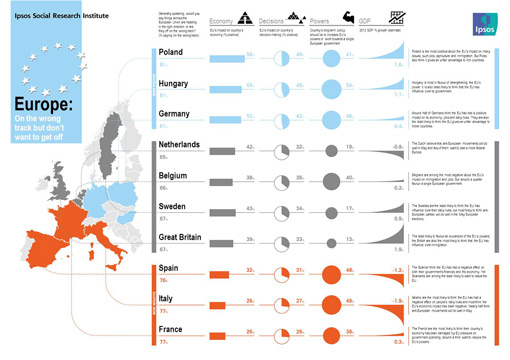 The policy area where, on average, the EU is seen to have most influence is on the economy, but the majority (59%, 61% in Britain) across the ten countries think this influence has been negative – as they do on the EU’s impact on jobs in their country (61%, 58% in Britain). This is likely to be linked to perceptions of the austerity programme; 64% on average believe that their country’s economy has been damaged by EU pressure on Eurozone member governments to cut their spending. This includes 64% of Britons, even though the UK is not part of the Eurozone.

This all leads to doubts about the benefits membership of the EU has brought. Four in ten Britons (39%) believe that their standard of living is higher than it would have been if their country had not joined the EU (the average across the ten countries as a whole is 35%).

Again, there are clear differences in opinion by country, which often appear related to the economic climate people have experienced since the crisis. Citizens in France, Italy and Spain are all particularly negative about the EU’s impact on the economy (74%, 74%, and 68% respectively are critical), and many feel that their economy has been damaged by the demands of austerity (75%, 70%, and 75% respectively). Over half, though, of people in Poland (59%), Hungary (53%) and Germany (52%) think that the EU has benefited their economy.

“We know that attitudes to the EU have been hardening in recent years, and that Britons are especially concerned about immigration compared with other countries, so the negative tone of these results fits in with that trend – especially given Europe’s economic difficulties since the crash. There is also clearly some expectation that anti-European parties will do well in the upcoming European elections. However, when given the chance Britons say they prefer staying in a reduced EU rather than leaving it altogether. It is also interesting to see that in some countries such as Spain, Italy and France views are even more negative, especially on economic issues - although this again does not always translate into an automatic desire to leave the EU.”

Between February 4th and February 18th 2014, Ipsos surveyed 7,028 respondents in nine European countries for their attitudes towards the European Union. The data was collected via Ipsos online panels and then weighted to represent the general population in the country surveyed. Respondents aged 16-64 were interviewed via the Ipsos Online Panel in Belgium, France, Great Britain, Germany, Hungary, Italy, Poland, Spain and Sweden. Approximately 1000+ individuals participated on a country by country basis with the exception of Belgium, Hungary, Poland and Sweden where each have a sample of approximately 500. A further 1,017 were interviewed online in the Netherlands between 18-20 February 2014. This sample is representative for the Dutch population which may vote (all Dutch aged 18+), and data are weighted by age, sex, education, working status, region and previous national election behaviour.