The May Ipsos MORI issues Index shows a continued high level of concern about the COVID-19 pandemic, even as the vaccination campaign continues to lower age groups. Forty-nine per cent of the public mention it as one of the biggest issues for Britain, exactly the same level of concern as has been recorded in April and March of this year. Prior to March, around three quarters of the public mentioned had COVID-19 as a major worry since the outbreak began.

The top five issues for Britain this month are the same as in April: the economy is the second-biggest worry, followed by concern around Brexit, the NHS and the environment.

The proportion worried about Brexit continues to decline. Twenty-two per cent mention it as a worry this month, which is the lowest score recorded since March 2016, before the referendum on the UK’s place in the European Union. This is also less than half the level of worry seen in December 2020 – as the UK exited the EU, 60 per cent mentioned issues related to Brexit as a major worry.

The types of people more likely to mention issues around the European Union and Brexit as a major concern for the country cover demographic groups typically associated with both leave and remain votes in the referendum: 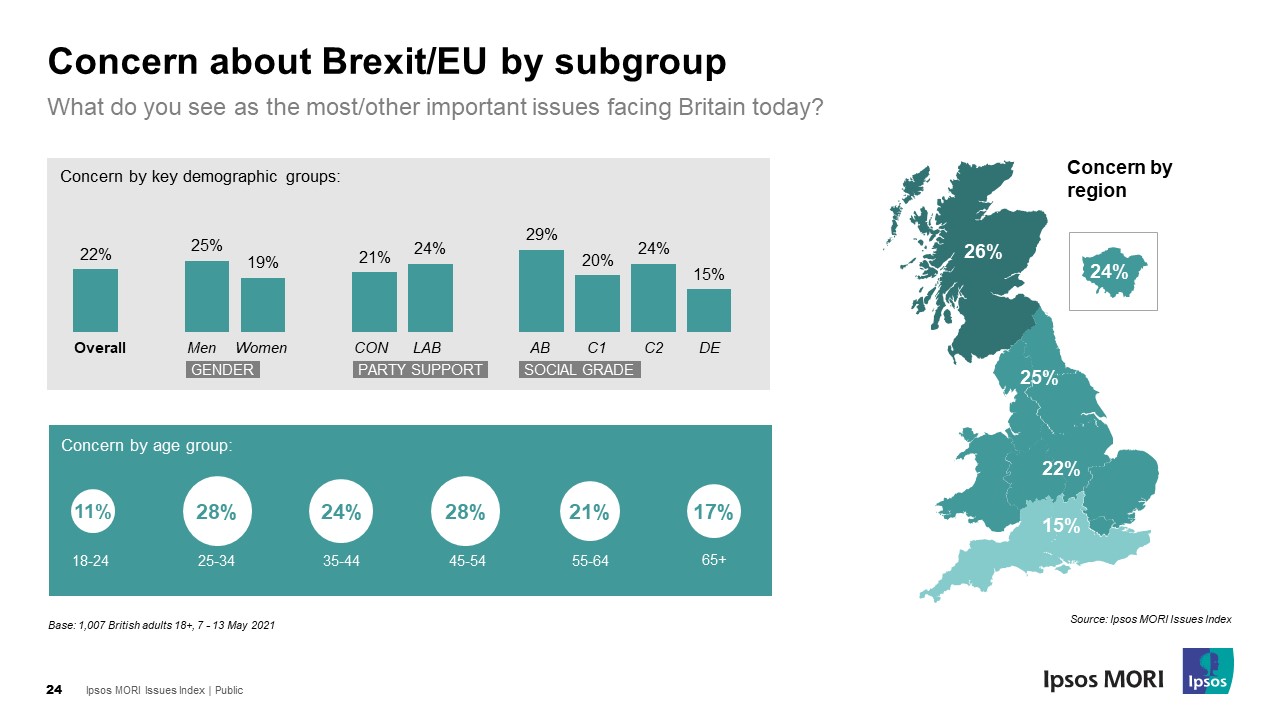 As governments in the UK decide whether to loosen pandemic restrictions further in June our polling suggests that, despite the success of the ongoing vaccination campaign, the public still remain as concerned about the pandemic as they were in March. Underneath this headline, we also see signs of rising concern over the NHS more broadly, climate change, and inequality.

Ipsos MORI's Issues Index is conducted monthly and provides an overview of the key issues concerning the country. Ipsos MORI interviewed a representative sample of 1,007 adults aged 18+ across Great Britain. The answers are spontaneous responses, and participants are not prompted with any answers.
Ipsos MORI's telephone omnibus was used for this survey. Interviews were conducted between 7 and 13 May 2021 across Great Britain. Data are weighted to match the profile of the population.