COVID-19 remains the public's top concern, but we’ve seen a dramatic fall in concern about COVID-19 this month from 72% to 49% as lockdown restrictions continue to ease. Concern about Brexit has also fallen again, with one quarter now mentioning it as a worry (26%), down from 33% in February. With the vaccine rollout continuing and concern around COVID-19 declining, there have been significant increases in worries about the NHS, education and housing. 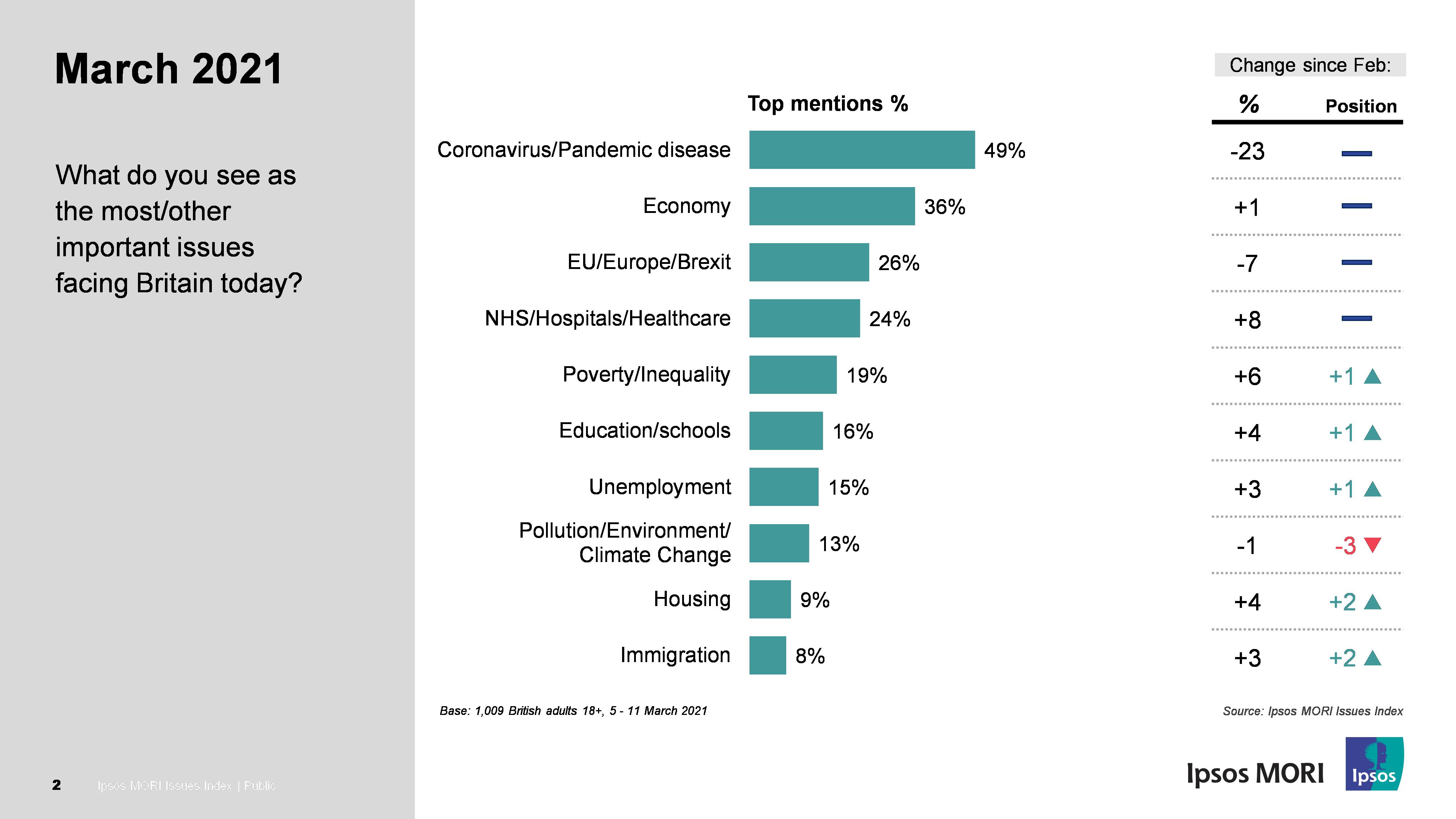 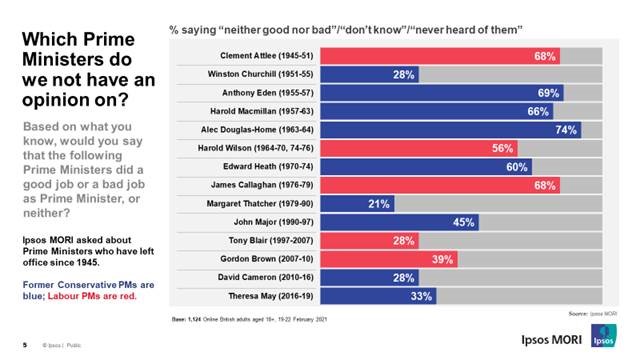 Despite significant media coverage when it comes to Brexit, six in ten Britons say it has made no difference to their daily life. However, more have seen a negative impact than a positive one. Four in ten Britons expect the nature of the relationship between the EU and UK to continue to be negotiated over the next few years as they consider there to be at least some major issues still to be resolved. 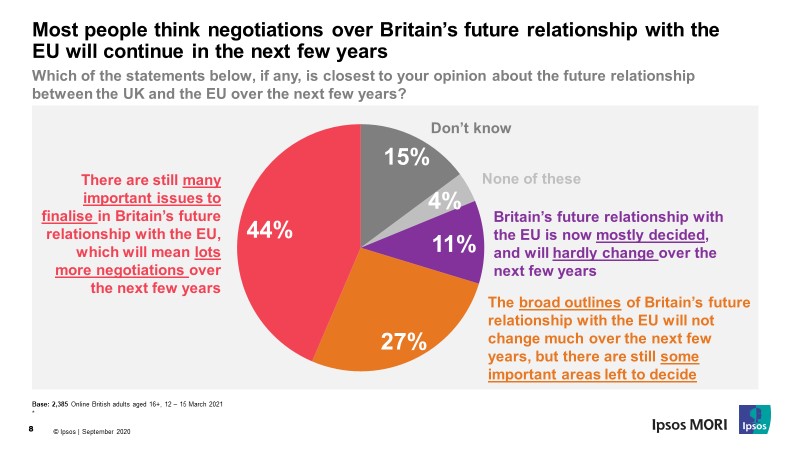 While there has been heavy criticism on how the Government was handling the pandemic, 67% British public feel the UK has handled the vaccine programme better than the EU. Only 12% think it was handled worse. Two-fifths of Britons believe Brexit has made Britain’s response to the COVID-19 pandemic better but the public is divided on whether this has brought the UK and the EU closer together or further apart. 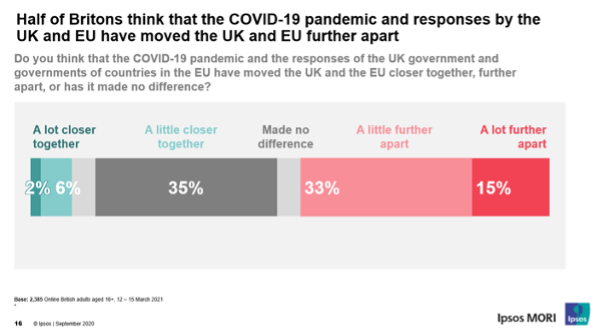 There is particularly strong support for their use for people who are travelling abroad (78%), for visiting relatives in hospitals (74%). Eight in ten say that they should be required to work on the frontline in the NHS or care sector (79%), seven in ten say the same about teaching (69%).While Britons recognise some of the ethical or legal issues surrounding vaccine passports, six in ten think the potential benefits to the economy outweigh any concern. 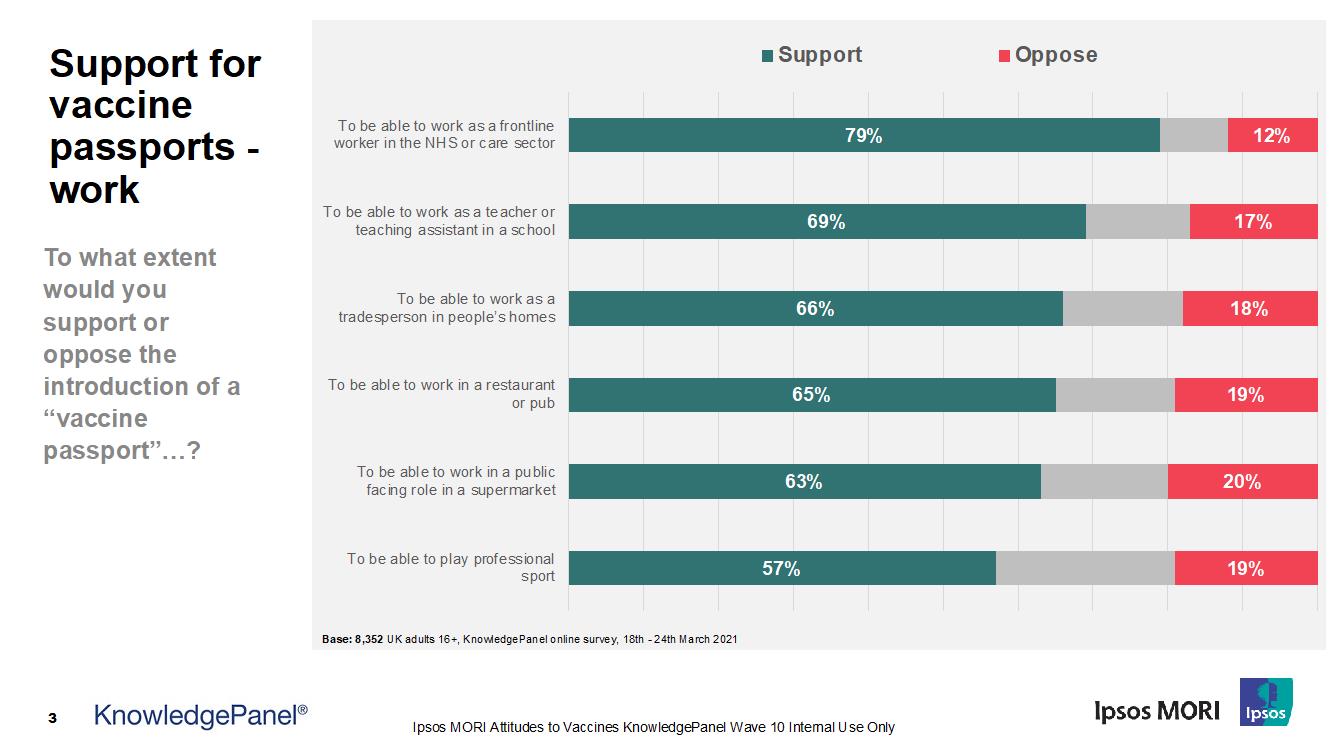 Ahead of the Holyrood Election in May, Ipsos MORI Scotland will be keeping up with the research, polls and trends.

The public are fairly divided on if there will miss being in lockdown. Over half say they’ll miss at least some aspects of lockdown, while 42% say they won’t miss any. Family time is mentioned as being the thing the public will miss most.

We’ve found that popularity of the Monarchy remains stable. Despite the controversy surrounding the Oprah Winfrey interview, the Queen remains the most popular member of the Royal Family (40%) and Harry is still fourth at 25%.

Looking at life post-lockdown, our study with Nationwide finds that 90% of those working from home want to keep doing so at least once a week in future.