Concern about the economy remains the top issue facing the country, and men and young people are particularly concerned about unemployment. Concern about crime rises following the Cumbria shootings.

Ipsos MORI's June Issues Index shows that the economy remains the public's most important issue by some margin. Despite a drop of six points from last month's record score of 71%, two-thirds (65%) place the economy among the biggest issues facing the country, and for half (50%) it is the single most important issue. The scores for most issues have fallen back this month; it is likely that many were high last month simply due to the election campaign.

Social grade is a key variable in terms of concern about the economy. Three-quarters (73%) of those in social grades ABC1 (managerial and professional occupations) are concerned about this issue, compared with 56% of C2DEs (skilled and unskilled manual roles, and those dependant on state benefits). Age is a factor, too, with people under the age of 35 slightly less likely to be concerned (57% compared to 68% of those aged 35+)

The second most important issue, according to the public, is race relations/immigration. Three in ten (29%) mention this issue, and, again, older respondents are more likely do so - 36% of those aged over 55 mention it, compared with 24% of those aged between 18-34. 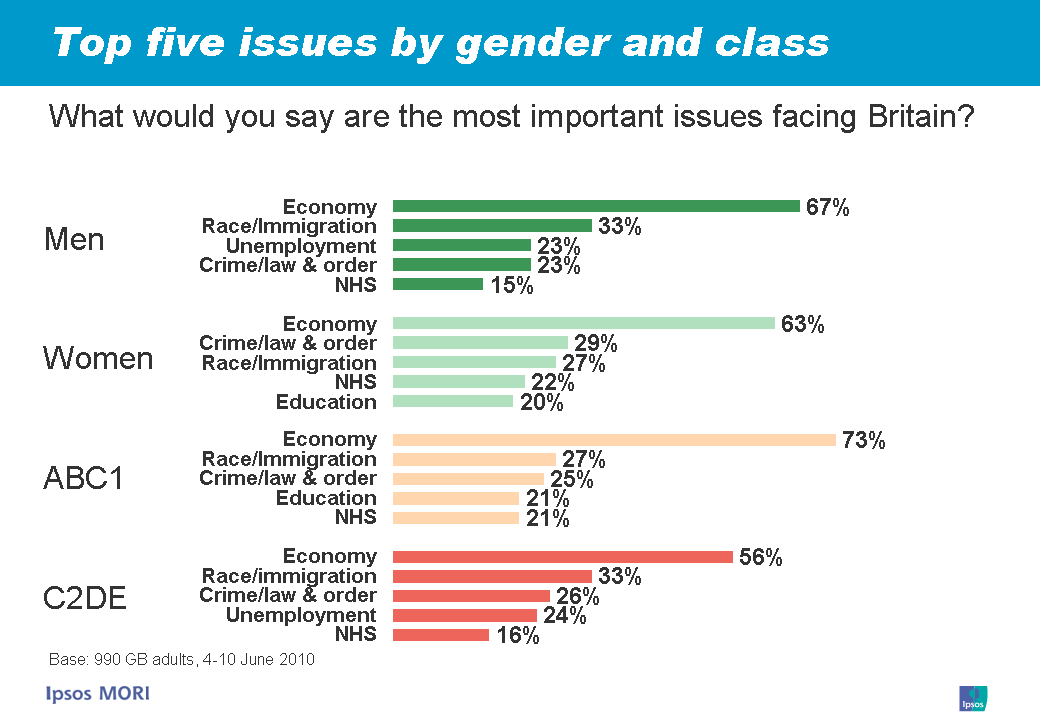 Crime/law and order is the third most important issue facing the country; 26% of the public mention it. This represents a six percentage point increase since May. Women are more likely to be concerned than men (29% versus 23% respectively).

Interviewing was conducted in the wake of the Cumbria shootings and the murders in Bradford, which may explain the increase in concern about crime this month. There were also increases in the importance of crime following the shootings in Hungerford and Dunblane; by 10 and 8 points respectively, and it increased even more dramatically - by 20 percentage points to its highest ever standing of 55% - immediately following the accidental shooting of Rhys Jones.

Technical note Ipsos MORI's Issues Index is conducted monthly and provides an overview of the key issues concerning the country. Ipsos MORI interviewed a representative quota sample of 990 adults aged 18+ across Great Britain. The questions are spontaneous - i.e. respondents are not prompted with any answers.  Ipsos MORI's Capibus vehicle was used for this survey. Interviews were conducted face-to-face in-home between 4th-10th June 2010 at 161 sampling points across Great Britain. Data are weighted to match the profile of the population.