New polling from Ipsos MORI shows Ed Miliband is still to convince the public of his own qualities, despite presiding over the most popular party. Just three in ten (31%) of Britons say they like Mr Miliband - effectively level with Nick Clegg on 33% and Nigel Farage on 32% - but 63% say they dislike him. David Cameron stands out as the most popular of the leaders, with just under half (48%) liking him.

This is in contrast to the public’s views of their parties, where Labour has a clear lead. Half of the public say they like the Labour Party 50%, compared with around four in ten each for the Conservatives (42%) and the Liberal Democrats (41%) and three in ten for UKIP (29%). 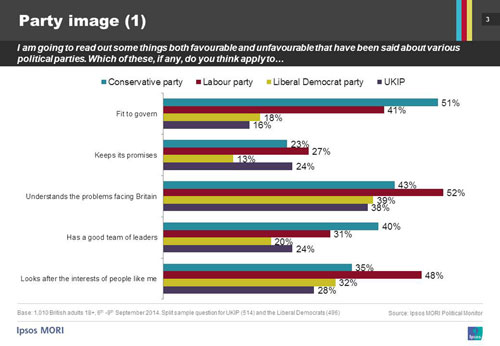 The Conservatives are seen as most fit to govern (51%, against 41% for Labour, 18% for the Liberal Democrats and 16% for UKIP) and as having the best team of leaders (40%, over 31% for Labour, 24% for UKIP and 20% for the Liberal Democrats). However, they are also seen as most divided, with 61% describing them as such – and are seen as more so than last September (57%), while Labour (47%, down from 62%) and the Liberal Democrats (56%, down from 62%) have moved in the opposite direction ahead of the general election run-in. UKIP (now on 36%, up from 28% last year) are also seen as increasingly divided – but at a far lower level than the other three main parties. 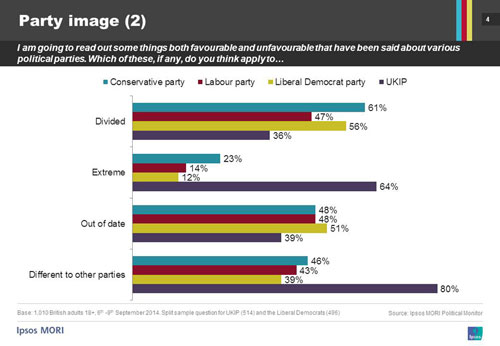 The Liberal Democrats are seen as most out-of-date on 51%, just above Labour and the Conservatives (both 48%), with UKIP least described as such (39%). Nick Clegg’s party is also least trusted to keep its promises (13%, against 23% for the Conservatives, 24% for UKIP and 27% for Labour).

However, the Labour leader lags on personality – where Mr Farage rules the roost. Two thirds (67%) of Britons think Nigel Farage has a lot of personality, well ahead of Mr Cameron (39%), with Messrs Clegg (26%) and Miliband (20%) lagging well behind. Mr Farage also is most considered to have a clear vision for Britain (on 58%, just ahead of David Cameron on 55%, Ed Miliband on 43%, and Nick Clegg who lags well behind on 26%). 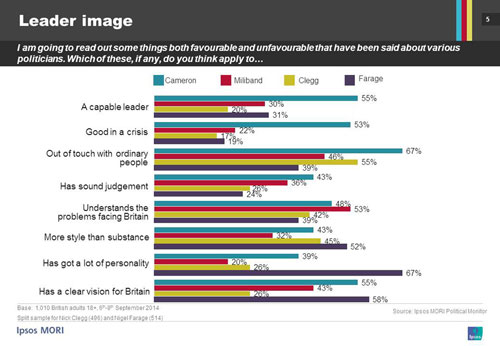 “All the parties have a patchwork of positives and problems that need addressing, and going into conference season it doesn’t seem as if any of them hold the trump card with voters.  Labour is the most liked party, but Ed Miliband still hasn’t convinced the public on his Prime Ministerial qualities – where David Cameron has the edge, but is hampered by being seen as out of touch and by a more disliked party.  Meanwhile the Liberal Democrats remain the least trusted, and UKIP are the most distinctive – but also the most extreme.”