As David Cameron ramps up his efforts this week to secure a new deal for Britain in the EU Ipsos MORI’s latest Political Monitor reveals little change from January amongst the public when it comes to how they will vote in the referendum on EU membership. When asked the referendum question “should the United Kingdom remain a member of the European Union or leave the European Union?” the poll finds a majority (54%) would vote to remain a member (down 1 point from January) and 36% would vote to leave (no change). Ipsos MORI’s trend question on EU membership also reveals little difference from last month. When asked “if there were a referendum now on whether Britain should stay in or get out of the European Union, how would you vote?” half (51%) would vote to stay in (up 1 point) while 36% would vote to get out (down 2 points). 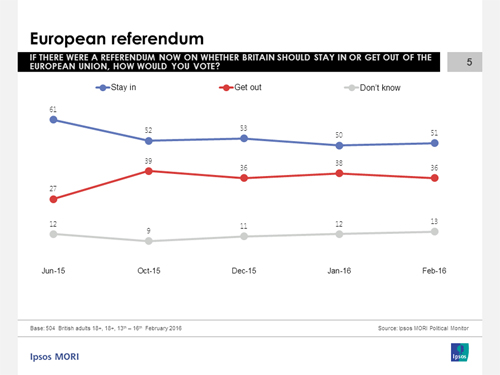 As we get closer to holding the referendum more of the public seem to making up their minds, but a significant proportion are still not sure. Six in ten (63%) say they have definitely made up their mind (up 5 points from January) while one in three (35%) say they may change their mind (down 4 points). There is no difference between those who would vote to stay in and those who would vote to leave the EU, while Conservative supporters (41%) and women (42%) are most likely to change their minds. Despite this, six in ten (62%) believe that Britain will vote to remain an EU member when the referendum does happen while a quarter (26%) believe Britain will vote to leave.

Despite his efforts to achieve a good deal the public still lack confidence in the Prime Minister’s ability to do so. One in three say they have confidence in David Cameron (up 3 points) and three in five (62%) have little confidence in him (down 1 point). Conservative supporters are split with half (50%) confident in Mr Cameron achieving a good deal for Britain while 46% say they are not.

The new poll also finds that it is David Cameron who holds the most sway in convincing voters, with Boris Johnson second. Forty-four percent say that the Prime Minister will be important for them in deciding how they will vote in the referendum on EU membership. The Mayor of London, Boris Johnson, comes next with one in three (32%) said that he will be important in helping them decide. Both Mr Cameron and Mr Johnson are followed by Theresa May and George Osborne (both 28%), Jeremy Corbyn (27%), Stuart Rose of the Britain Stronger in Europe campaign (23%), Nicola Sturgeon (22%), Nigel Lawson of the Vote Leave campaign (21%), and UKIP leader Nigel Farage (20%). 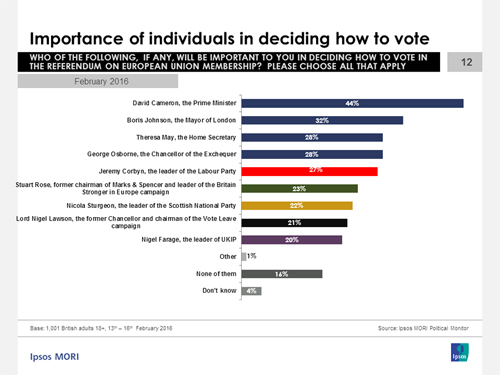 Our ongoing vote intention figures still show a Conservative lead over Labour. The Conservatives currently stand at 39% compared to Labour with 33%, the Liberal Democrats at 6% and UKIP at 12%.

“There’s little movement in the public’s views towards Europe – but still time for that to change (even though the public expectation is still for a ‘remain’ victory). Meanwhile, although other figures are higher among individual groups, Boris Johnson has a broad range of appeal – both to in and out supporters, Conservatives and non-Conservatives, and whether people have already decided or may change their minds.”

Ipsos MORI interviewed a representative sample of 1,001 adults aged 18+ across Great Britain. Interviews were conducted by telephone 13-16 February 2016. Data are weighted to match the profile of the population.