New research finds a majority (59%) of Britons think things in the UK are off on the wrong track, and 41% think the country is heading in the right direction.

Britons are the 9th most positive about their own country out of the 24 surveyed, behind developing economies such as China (where 89% say things are headed in the right direction) and India (72%). We’re also more likely to think things are on the right direction than citizens of many European neighbours including Germany (35%), Poland (30%) and Italy (20%). 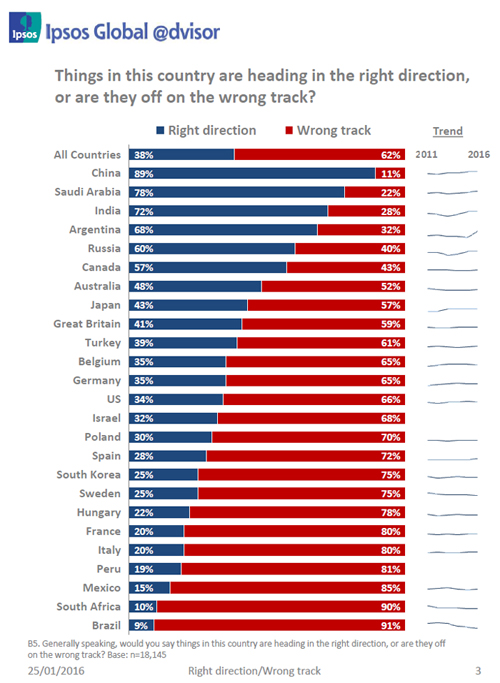 Fieldwork was conducted between 29 December 2015 and 8 January 2016. An International sample of 18,145 adults aged 18-64 in the US, Israel and Canada, and age 16-64 in all other countries, were interviewed. Approximately 1000+ individuals participated on a country by country basis via the Ipsos Online Panel with the exception of Argentina, Belgium, Chile, Colombia, Hungary, Israel, Mexico, Peru, Poland, Russia, Saudi Arabia, South Africa, South Korea, Sweden, Thailand and Turkey, where each have a sample approximately 500+.