A new survey by Ipsos MORI reveals British attitudes towards the refugee crisis and its entanglement with national security. The exclusive poll uniquely captures public attitudes both before and after the tragic events in Paris last weekend.

On the potential threats to Britain post-Paris, the vast majority (95%) of Britons think there is a very or somewhat real threat of a terrorist attack in Britain. This represents an increase of ten points on October’s figure (85%). 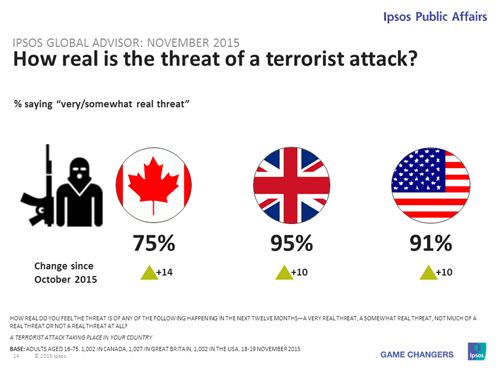 More than eight in ten Britons (84%) think there is a very or somewhat real threat that Britain will be involved in a war with another country. This is a 15 point increase on October’s figure (69%).

Against this backdrop, the willingness of Britons to consider more active intervention in Syria has increased since 2013 – the time of David Cameron’s unsuccessful attempt to gain the support of the House of Commons for military action. Just three in ten (30%) continue to think the problems in Syria are none of our business and that we should not interfere; this is around half the level (58%) seen in September 2013. 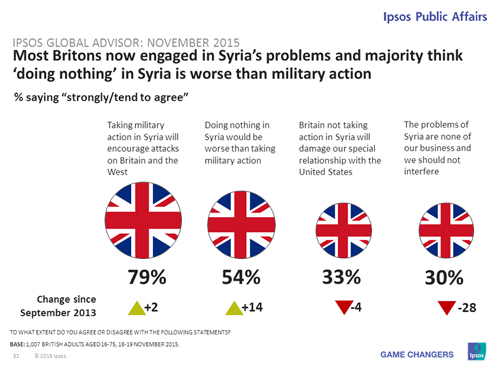 Over half (54%) now think that doing nothing in Syria is worse than taking military action, which is an increase of fourteen points (from 40%) since September 2013. A third (33%) also think Britain doing nothing in Syria will damage the country’s relationship with the USA. However, eight in ten (79%) think such action will encourage attacks in Britain (up two points from September 2013). 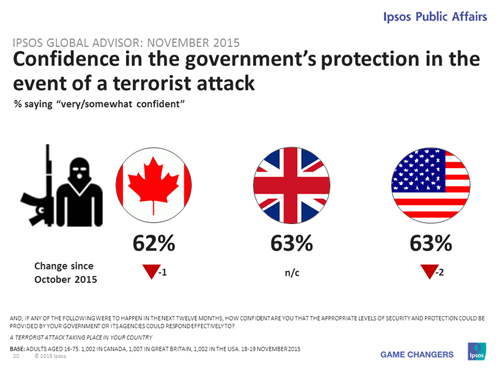 The Paris attacks also appear to have affected views of refugees, but often not greatly, and there has been less change in our attitudes to immigration as a whole. 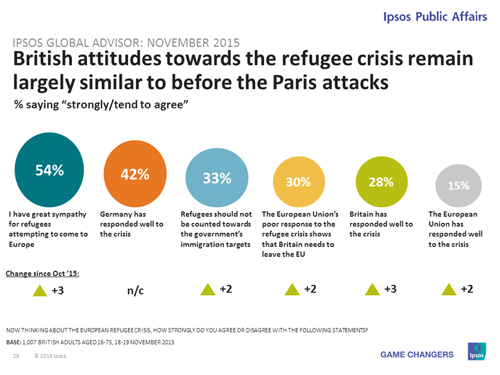 "This sense of threat may be influencing the increased focus on control of refugee numbers and security checks - although we need to remember that this survey was conducted very soon after the attacks and this may be a short lived reaction. We have also seen very little change in wider views on immigration which suggests that people are not generalising too widely as a result of one tragic event."

The latest survey was conducted online 18-19 November and is compared with results from two surveys also conducted online in October. The first on Ipsos’s G@ conducted between 25 September - 9 October and a second Ipsos MORI’s Unbound immigration survey conducted between 15-19 October. The samples are all approximately 1,000 British adults aged 16-75 (for the most recent survey) and 16-64 (for the preceding two surveys) and weighted to the national profile of Britain.