Just five days until his Autumn Statement Ipsos MORI’s new Political Monitor shows a growing dissatisfaction with George Osborne amongst the British public. One in three (35%) say that they are satisfied with the way he is doing his job as Chancellor of the Exchequer – down nine points from July. Half (52%) say that they are dissatisfied – up eight points since after the Summer Budget, which gives him his worst figures since March 2013. 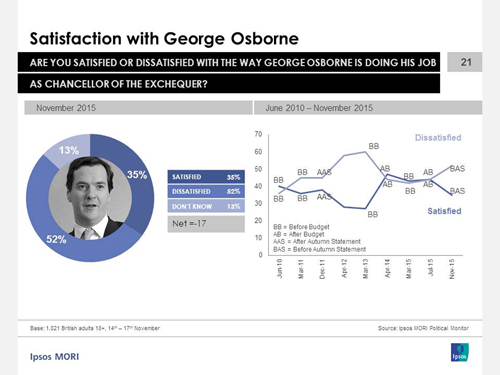 If given the chance however just 22% think a Labour government led by Jeremy Corbyn and John McDonnell would do a better job at managing the economy – a comparable figure to the 19% who said the same about Ed Miliband and Ed Balls in March before the election. Four in ten (41%) think Mr Corbyn and Mr McDonnell would do a worse job (as did 37% of Labour in March), and 28% say there would be no difference. Half (55%) of Labour supporters say they would do a better job on the economy (9% say they’d do a worse job and 26% say it would be the same). Jeremy Corbyn and John McDonnell fare far worse amongst supporters of the other parties. Just 1% of Conservative supporters think they would do a better job (85% think worse) as do 5% of both Liberal Democrats and UKIP supporters (36% and 58% respectively think they’d do worse). 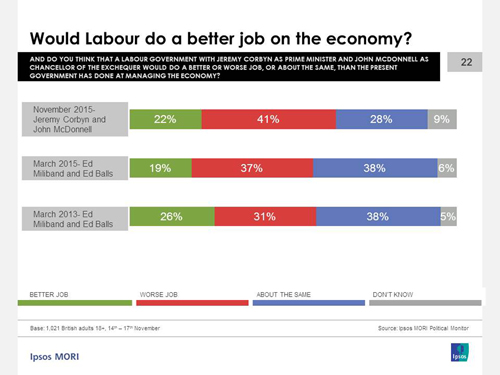 Labour and the Conservatives though run neck-and-neck when asked which party has the best balance between cutting spending to reduce the deficit and not damaging public services. Twenty-seven percent of Britons say Labour has the best balance versus 26% who pick the Conservatives. When it comes to looking out for the interests of working people however Labour enjoy a clear lead. Two in five (41%) say Labour would be best at looking after working people’s interests while one in four (25%) choose the Conservatives. Just 6% pick the Liberal Democrats and 5% UKIP. 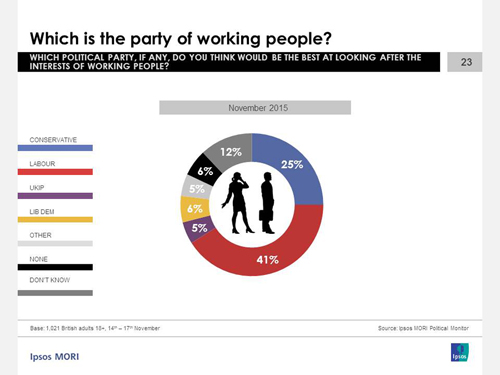 Looking ahead to the race to take over from David Cameron as Conservative party leader, Boris Johnson continues to lead the pack. One in four members of the public (25% - down two points from September) say he would be most likely to make them vote Conservative, while Theresa May comes second with 19% (up two points) and George Osborne third with 11% (down four points). The pattern among Conservative supporters (note not members) has changed since September. Then George Osborne had a marginal lead over the Mayor of London, but this month he has dropped to third place, down nine points to 23%. Boris Johnson has maintained his support at 32% (similar to his 29% in September) to take first place, while Theresa May’s popularity among her own party voters has risen from 18% to 26%. 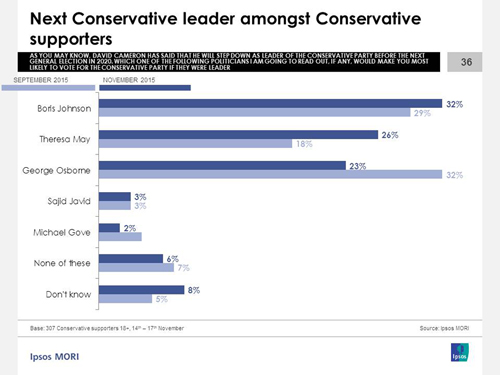 “George Osborne has lost some of his sparkle in the eyes of the public since the summer, as Britons’ nerves about the economy and public services increase. But Labour still lack credibility as an alternative – four in ten think they would do a worse job on the economy, no better for them than before the election.”

Ipsos MORI interviewed a representative sample of 1,021 adults aged 18+ across Great Britain. Interviews were conducted by telephone 14-17 November 2015. Data are weighted to match the profile of the population.