On the eve of Ipsos MORI’s key event to mark 20 years of a permanent office in Scotland, new polling for STV News suggests that voters think the ongoing debate about Scotland’s constitutional future will still be the key issue facing the country in 10 years from now.

When asked unprompted, 37% said that they thought the constitutional issue would be the single most important issue facing Scotland in 10 years’ time. This is almost three times as many who mentioned the economy which, at 13%, was the second most common answer given. Around 1 in 10 (11%) mentioned unemployment/lack of industry as the key challenge in 10 years while 6% mentioned immigration. 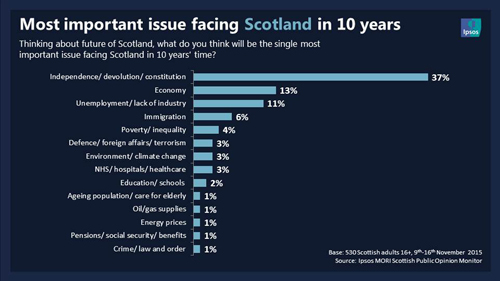 As far as global issues are concerned, when asked unprompted what the single most important issue facing the world will be in 10 years, a third of respondents (32%) mentioned issues of defence, terrorism and war. This was significantly higher than the 21% who mentioned think that the environment and climate change will be the key issue and 9% who mentioned issues of poverty and inequality. 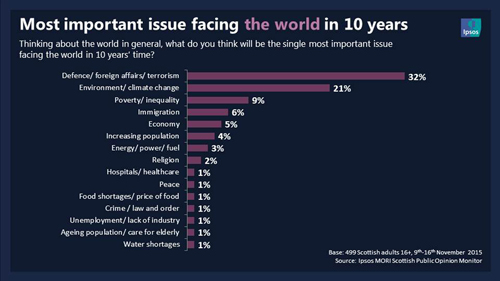 ‘More than a year since the independence referendum it is clear that, for many Scots, the issue is one which remains unresolved, with nearly four in ten thinking it will still be the number one issue facing the country in 2025.The fact that the issue is mentioned three times as much as the economy indicates the extent to which the issue dominates. On the world stage, issues of terrorism, war and defence are seen as what will dominate agendas in 2025. Unsurprisingly, unprompted mentions of these issues were highest during the latter stage of fieldwork, which took place after the atrocities in Paris on November 13th.’