In the final release from our poll for STV News to mark 20 years of Ipsos MORI’s permanent office in Scotland, more than half of Scots believe independence will happen in the next ten years. Looking ahead to 2025, 54% of Scots think it is likely that Scotland will become independent, while 44% think it is unlikely and 2% don’t know.

Elsewhere in the poll, most Scots think that, by 2025, Scotland will be a more equal society, more than half of our energy supplies will come from renewables, and students born in Scotland will be paying tuition fees here. Around half think that there will be a cure for most cancers in the next ten years.

Scots are fairly pessimistic about Scotland’s sporting prospects in the next ten years. Only 40% think Scotland will qualify for an international football tournament in this period, while fewer (35%) believe Scotland will win the Rugby World Cup. 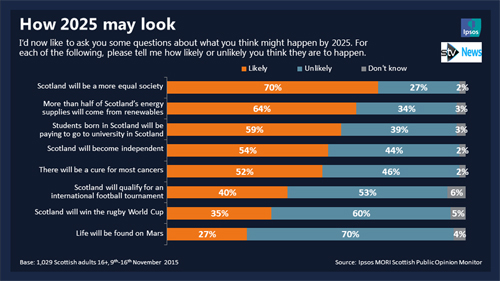 ‘This poll represents good news for ‘Yes’ supporters, with more than half of Scots believing independence is likely by 2025. Opinions may change if and when a second referendum is announced but, for now, a majority of Scots seem to think we are on the road to independence.'