In a far reaching poll for STV News to mark 20 years of Ipsos MORI’s permanent office in Scotland, it is clear that Scots think that health, social care and the police are likely to be the public services which deteriorate over the next ten years. 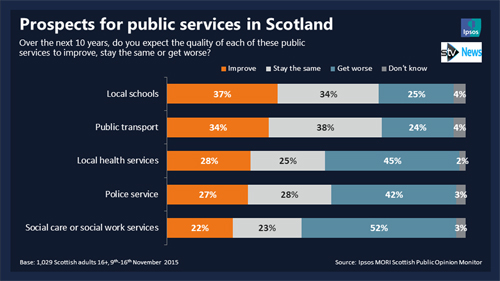 Although more Scots think that local schools and public transport will improve than get worse in the next ten years, it is noticeable that particularly those in the older age groups expect a worsening of health, social care and police services.

Elsewhere the poll highlights attitudes to a range of social issues, highlighting that most Scots do not think that there are too many immigrants in the country, that traditions are an important part of society and that gay men and lesbians should be free to live their lives as they wish. 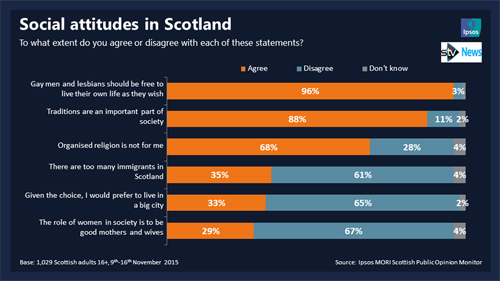 Looking to the future, optimism is high in relation to individuals and families and to the future of Scotland and, to a lesser extent, the UK as a whole. But Scots are more pessimistic than optimistic about the future of the world in general. And while most Scots believe that their own generation will have had a better life than that of their parents, we are more inclined to think that today’s youth specifically will have a worse life than that of their parents. 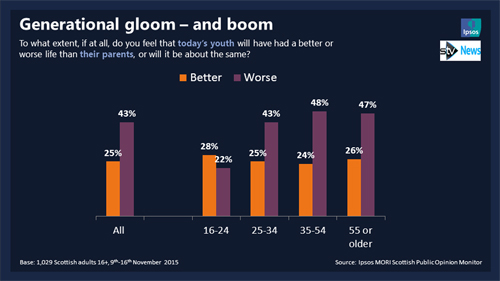 ‘As our population lives longer, it is clear that there is likely to be growing pressure on the health and social care services on which we will increasingly rely. Scots are aware of this and are fairly pessimistic about the future of these services. This is particularly true of the older generations who are likely to be the first to experience these services. However, Scots are more optimistic about the future of other public services and, in particular, the future for themselves, their families and for Scotland as a whole'