As we enter the final week of campaigning ahead of the referendum on the UK’s membership of the European Union (EU), our new poll for STV News suggests that the majority of Scots will back the campaign to retain membership.

Among those who are likely to vote next week, 58% would vote for the UK to stay in the EU while 33% support Brexit and 8% are undecided. Once we have removed undecided voters, 64% back Remain and 36% Brexit. 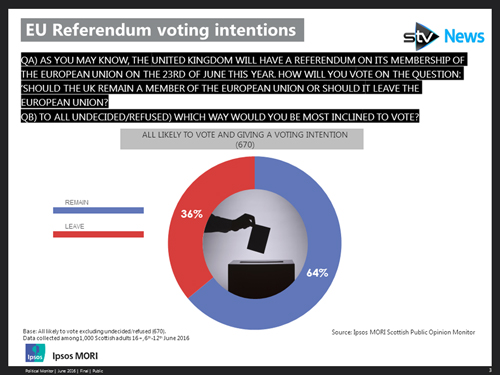 And on a range of measures, from economic performance to Scottish and British influence in the world, a potential Brexit is seen as being negative rather than positive. For example, 22% think that the Scottish economy will get better as a result of Brexit while 48% think it will get worse, while 13% think their standard of living will improve compared to 32% who think it will get worse. 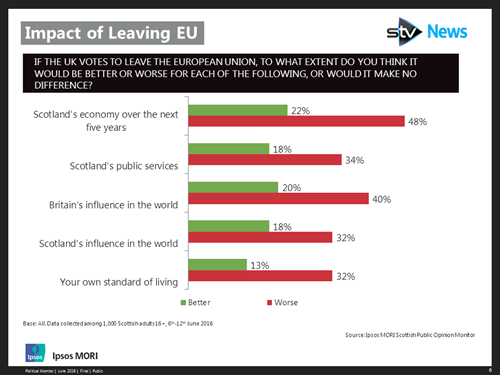 But while there is consistent scepticism about the impact of a possible Brexit, Scots are split on whether a UK vote to leave the EU, when Scots vote to stay in, should trigger a second independence referendum. In this scenario, 47% agree that there should be an indyref2 within two years while 45% disagree.

‘It has been apparent from polling for a long time that Scots are more likely to back continued UK membership of the EU than voters in other parts of the UK, especially in England. Although the referendum is UK wide, the vote in Scotland will be viewed with interest for two reasons. Firstly, it may be pivotal in deciding the outcome at a UK level, while secondly, there may be implications for a second independence referendum in the event of a Brexit when Scots have backed continued membership. On that issue, Scots remain divided as to whether that scenario should trigger indyref2.”