The world’s largest traveller and accommodation survey1 conducted by Ipsos MORI, on behalf of TripAdvisor™, examined motivations behind travellers’ holiday choices, traveller emotions at various stages of the holiday and the post-trip impact of travel. Their motivations were explored from a personal experience perspective as well as how they would like to be perceived by others. 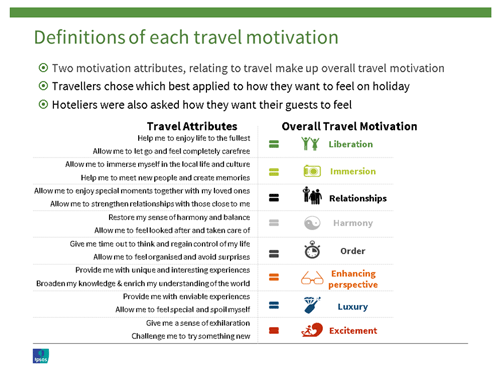 Research showed that for travellers, ‘enhancing perspective’ is the primary motivation for holiday choices for 71% of global travellers, followed by liberation (62%). In contrast, 73% of hotelier respondents want to provide their guests with a sense of ‘harmony.’ 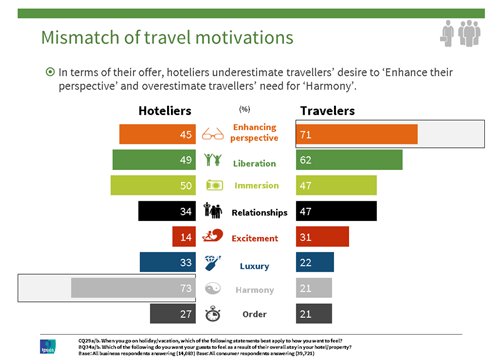 Travellers’ emotions during the five stages of travel: booking, arrival, during the stay, departure and back home were also examined. Not surprisingly, excitement peaks during lead-up and arrival, with travellers feeling most fulfilled once they return home.

Holiday experiences also affect everyday life changes with over a third globally introducing new foods into their diet. Two out of three global travellers also report that returning home from a trip prompted them to plan another holiday. 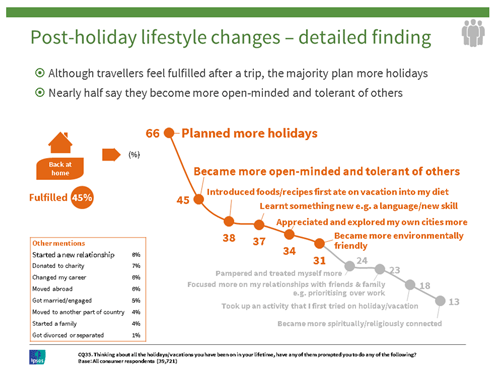 "It is fascinating that the findings have confirmed an old Chinese saying ‘travelling a thousand miles is better than reading a thousand books’. In an age where information is at people’s fingertips and a large proportion of people are connected 24/7, the fact that they are still looking to enhance their perspectives on holiday says that the internet cannot replace the experience you get when you are at your destination. With this in mind, there is clearly more that hotels, tourism boards and other travel providers should be doing to leverage traveller emotions to enhance experiences during the different stages of their holiday."

1The TripBarometer study, by TripAdvisor, is based upon an online survey conducted from 17 July to 5 August 2014, conducted by Ipsos MORI. A total of 53,804 interviews were completed in 32 markets, spanning 7 regions. The sample is made up of 39,721 consumers who are TripAdvisor website users and Ipsos online panelists who have researched their travel plans online in the last year, and 14,083 representatives from accommodations on TripAdvisor database, making it the world’s largest combined accommodation and traveller survey. The consumer survey data is weighted to represent the known profile of the online population, to keep in line with previous waves of TripBarometer. Equal weighting is also applied at country level for the business survey.