As the Scottish Parliament returns from recess and attention begins to focus on next year’s Holyrood election, our new poll for STV News shows the SNP continuing to dominate.

Among those certain to vote and who tend to vote in Scottish Parliament elections, 55% would cast their constituency vote for the SNP in an immediate Holyrood election (up 2 points from January 2015), while 20% would vote for Scottish Labour (down 4 points). Support for the Scottish Conservatives is up by 1 point to 12% while the Scottish Liberal Democrats are at 7% (up 2 points). 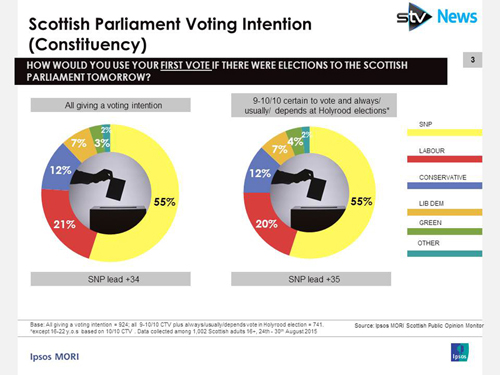 There are similar results for the party list vote, with 50% backing the SNP, 20% Scottish Labour and 12% supporting the Scottish Conservatives, while the Scottish Greens record 8%, just ahead of the Scottish Liberal Democrats on 7%.

There is further good news for the SNP from the poll in relation to the public’s views on the core devolved policy areas and satisfaction in the party performance of different party leaders. On Healthcare and the NHS, around half (48%) of Scots think the SNP has the best policies for Scotland, compared to 18% who prefer Labour’s policies. Similarly, for education (49% vs 16%) and crime/ anti-social behaviour (40% vs.14%), the SNP holds the advantage. On environmental issues the Greens are in front with 36% saying they have the best policy compared to 28% for the SNP and 9% for Labour.In line with previous polls, First Minister Nicola Sturgeon continues to be Scotland’s most popular party leader with 71% saying they are satisfied with her performance compared to just 23% dissatisfied. New Scottish Labour leader Kezia Dugdale records a rating of 32% satisfied compared to 31% dissatisfied.

On a second independence referendum 50% support another vote happening in the next five years, rising to 58% within the next 10 years. And support for a ‘Yes’ vote has exceeded 50% for the first time since last year’s vote, with 53% saying they would vote ‘Yes’ 44% ‘No’ and 3% undecided. 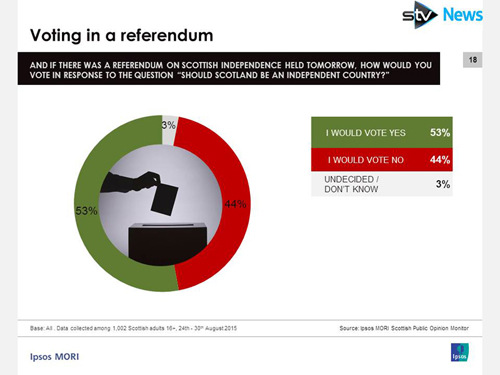 ‘This poll represents excellent news for the SNP, both in terms of support ahead of next year’s Holyrood vote and because support for independence has moved over 50% for the first time. The poll highlights the significant challenges facing new Scottish Labour leader Kezia Dugdale; Labour is far behind the SNP on the key battleground policies for next year and there is no sign yet that they are making up any ground. As the election gets closer she will hope to see Labour gain ground on policies and on public support.'