With the General Election a little over 100 days away, our new poll for STV News shows the SNP maintaining a strong position.

Among those who told us that they would be ‘absolutely certain’ to vote in an immediate general election, 52% would cast their vote for the SNP (no change from our last poll in October), while 24% would vote for Scottish Labour (up 1 point). Support for the Scottish Conservatives is up by 2 points to 12% while the Scottish Liberal Democrats and Scottish Greens each enjoy 4% support, both down by 2 points. 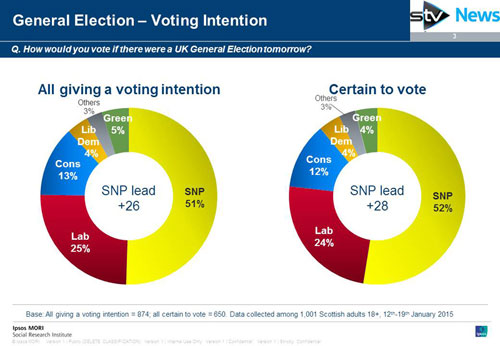 Around a third of voters (34%) are satisfied with the performance of Labour’s new leader Jim Murphy while 38% are dissatisfied and 28% are unsure so far. Around half (48%) of voters tell us that Mr Murphy’s appointment makes no difference to their likelihood of voting Labour in May, while 20% say it makes it more likely and 28% less likely.

Mr Murphy’s ratings compare unfavourably to those for new First Minister Nicola Sturgeon, with 69% of voters satisfied compared to just 20% dissatisfied. Meanwhile the Prime Minister, Deputy Prime Minister and leader of the UK Labour Party again have low satisfaction scores with Scottish voters with ratings of 27%, 18% and 21% respectively.

‘This poll reinforces the dominant position of the SNP and the challenges facing Labour as the general election looms ever closer. Although support for Labour has marginally increased since October, they will need to make inroads into the SNP’s lead if they are to avoid a disappointing election result.. This poll measures current attitudes among Scots rather than predicting the outcome in May and all parties will be closely watching the extent to which opinion changes as the election gets closer.’