As we enter the final week of campaigning ahead of the fifth Holyrood parliament elections, our new poll for STV News continues to highlight the dominance of the SNP, while giving the Conservatives and Greens cause for optimism.

Among those likely to vote on May 5th, 51% would cast their constituency vote for the SNP (down two points from February), while 19% would vote for Scottish Labour (down one point). The Scottish Conservatives are just one behind Labour at 18% (up two points) while support for the Scottish Liberal Democrats remains unchanged at 6%. 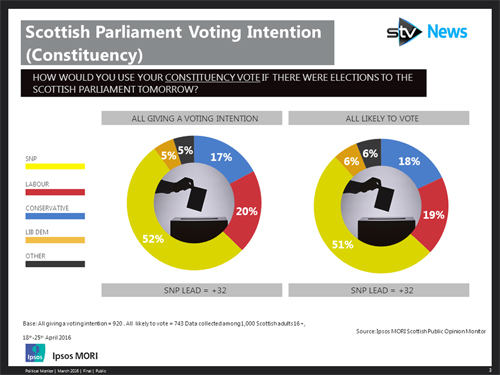 Voting intention on the regional element of the election, crucial to the eventual distribution of seats between parties, suggests more changes. The SNP is still significantly ahead at 45% (down four points from February, while the Conservatives are in second place at 19% (up four points) and Labour is down two points at 17%. Meanwhile support for the Scottish Greens has increased to 10% (up four points) while the Scottish Liberal Democrats are at 7% (down one point). 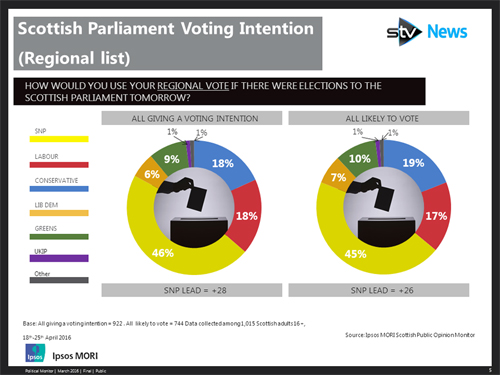 Shortly after the Holyrood election, the whole of the UK will vote on whether Britain should remain in or leave the European Union. Attitudes to that question in Scotland remain broadly similar to our last poll in February, with 60% supporting ‘Remain’ (down 2 points) and 26% backing ‘Leave’ (unchanged). When we include those who are leaning one way or the other, two-thirds of Scots (66%) want to remain in the EU while 29% want to leave, with 5% undecided. 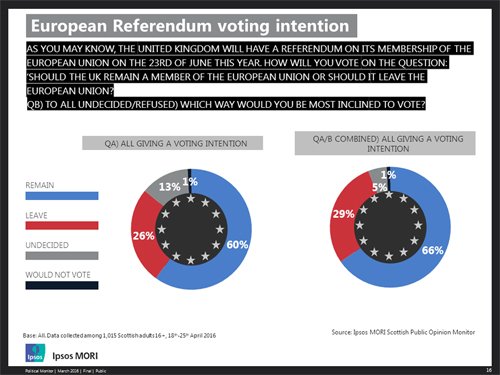 ‘We are now approaching the end of the campaign for the Holyrood election and there is little evidence to suggest anything other than a victory for the SNP. However, on two of the key issues raised during the campaign there are some interesting findings. Firstly, the Conservatives are marginally ahead of Labour in the crucial regional vote which gives them an opportunity to gain more seats and become the official opposition. Secondly, there is strong support for the Greens, giving them hope that they will add to the current tally of two MSPs’.