A new Ipsos MORI survey shows that two-thirds (67%) of people think that the police should be allowed to access journalist phone records, but only with the approval of a judge. This follows a number of revelations early in the month that police, including officers charged with MP Chris Huhne’s investigation, had secretly obtained the phone records of newspaper reporters. 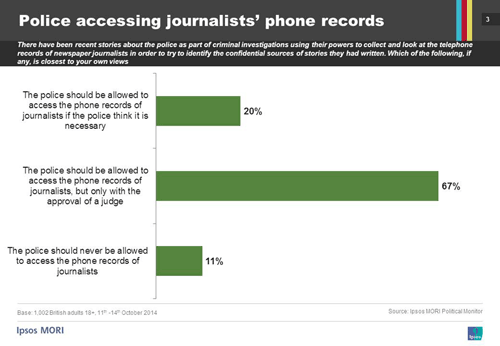 “The public are concerned about privacy as well as law and order, and their consent can’t be taken for granted on these issues - our research tells us that while few think the police should never be able to use these types of powers, it depends on the seriousness of the alleged crime, who is affected, and the safeguards in place. People have much more confidence if a judge has to approve any requests.”