An Ipsos MORI KnowledgePanel poll has found that views on the UK Government’s handling of the pandemic vary across the 4 nations of the UK, with a majority of those in Scotland and Northern Ireland believing that they’ve handled the pandemic badly. 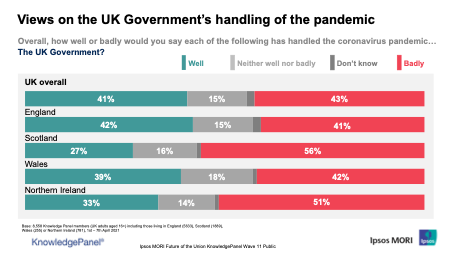 The Northern Irish executive is the worst performing of the devolved administrations with 46% of those in Northern Ireland believing that they have handled the COVID-19 pandemic badly, while only a third (34%) believe they’ve handled it well. 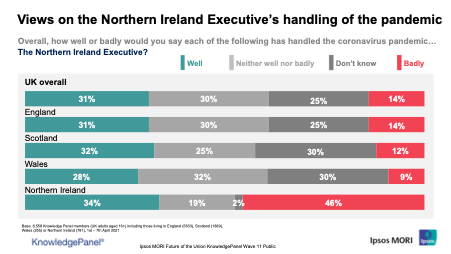 This compares unfavourably with the views of those in Wales and Scotland on their own devolved government’s responses. In Scotland two thirds (64%) of Scots believe that the Scottish Government has handled the pandemic well with just one in 5 saying they’ve handled it badly. 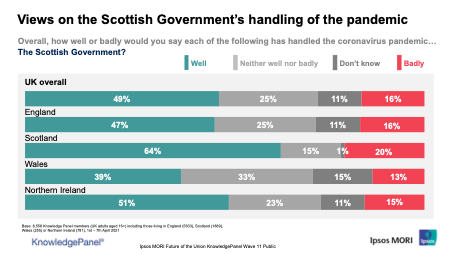 In Wales 57% of Welsh respondents said the Welsh Government has handled the pandemic well compared to just one in four badly. 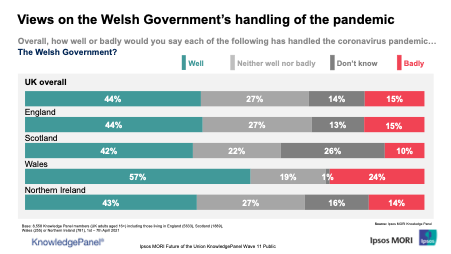 Just a week before elections to Holyrood and the Senedd, our UK KnowledgePanel poll finds that there are clear national differences across the United Kingdom towards how the different governments have handled the COVID pandemic. We will have to wait until 6th May to see if those positive ratings for the Scottish and Welsh governments may benefit the governing parties there, while with the announcement of Arlene Foster’s resignation as Northern Irish First Minister this data suggests that dealing with the pandemic will be one of the top of the priorities facing her successor.

This data has been collected by Ipsos MORI’s UK KnowledgePanel, a random probability panel which provides gold standard insights into the UK population, by providing bigger sample sizes via the most rigorous research methods

Ipsos MORI interviewed a representative sample of 8,558 people over 16 in the UK. Interviews were conducted online from 1 to 7 April 2021.