Voters in Scotland go to the polls on May 5th in the most significant Holyrood election since the new devolved parliament was established in 1999. This election is the first to take place since the new powers, including for setting income tax levels, were transferred to Holyrood following the recently enacted Scotland Act.

These new responsibilities mean that the parties have taken positions on some issues for the first time in a Holyrood election and will mean that issues of tax and welfare will be central to the campaign. Our new poll provides clues about the priorities of voters as they weigh up their decisions ahead of the election.

In broad terms, when it comes to using these tax powers to raise additional money for public spending Scots are more supportive of targeting those with the deepest pockets rather than increases across the board.

As far as tax is concerned, the single most important priority for Scots is to increase tax for the wealthiest in the country. Among the four tax proposals put to respondents, increasing the top rate of tax, paid by those earning over £150,000 per year, from 45p to 50p was seen as the greatest priority, receiving an average score of 7.3 out of 10. As one might expect, support for this measure is highest among older Scots (7.8 out of 10 among those who are retired) and among those who live in the most deprived neighbourhoods in the country (7.8 out of 10). It is however instructive to note that, among those in the most affluent neighbourhoods, the measure receives a score of 6.6, suggesting it still has some support in these areas.

Support for other measures which would result in different tax rates in Scotland is lower than support for keeping rates the same in Scotland and England. The widely debated proposal of increasing rates of income tax by 1p receives an average score of 6.2, while the plan to keep the 40p income tax threshold at its current level, rather than raising it as outlined in the UK budget, is significantly less popular with a score of 5.3. At the same time, the principle of keeping income tax rates the same here as in England receives an average score of 6.5 out of 10, suggesting that there is some support for being modest in differentiating tax rates. 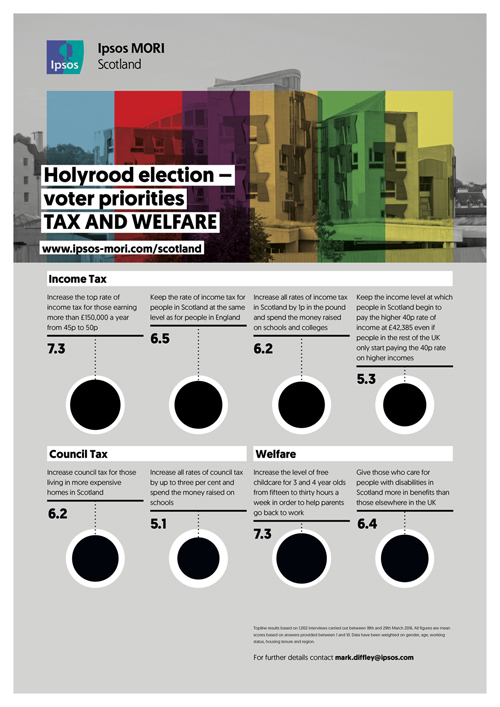 The issue of council tax rates is also key to the Holyrood campaign and, once again, there is significantly more support for any increases to be focused on the wealthiest rather than across the board on all council tax payers. With an average score of 6.2 out of 10, increasing council tax for those in more expensive homes is seen as a significantly greater priority than increasing the tax for all who pay it and spending the money raised on schools.

Both of the welfare proposals tested in the survey receive high priority scores. In particular, doubling the amount of free childcare for three and four year-olds is popular with an average score of 7.3 out of 10, increasing to 8.2 for the youngest Scots (16-24) and 8.1 among those who live in the most deprived communities. The proposal to give carers of people with disabilities more in benefits than carers in the rest of the UK is seen as less of a priority though it still has an average score of 6.4 out of 10. As with the childcare proposal, this measure has highest support among Scots who live in the country’s most deprived neighbourhoods.

As with all elections, the party that can demonstrate economic competence with voters is likely to reap the electoral rewards. This survey will give them all clues as to how their messages are likely to be received during the weeks of campaigning ahead.

Topline results based on 1,002 interviews carried out between 18th and 29th March 2016. All figures are mean scores based on answers provided between 1 and 10. Data have been weighted on gender, age, working status, housing tenure and region.