The Hansard Society recently launched "Audit of Engagement 7: The 2010 Report" with a focus on MPs and Parliament" which contains the results of the Ipsos MORI survey carried out last November. This provides a look at the state of British public opinion in the run-up to the impending election to take place on May 6th. In this Worcester's Weblog, I offer some good news from work carried out by MORI for nearly 40 years which counters received wisdom about people's interest in politics. There is a wide-spread believe that dismay, even disgust, towards politics and politicians is widespread, a growing cancer in the state of the nation, and a threat to our democracy. To some degree this is true, but it is in my contrarian view based on values research that it is temporary and if radical action is taken in the near future in addition to that taken recently by the Parliament, which only scratched the surface of reform. There is no question about an erosion of voting, the evidence is clear. (Chart 1): 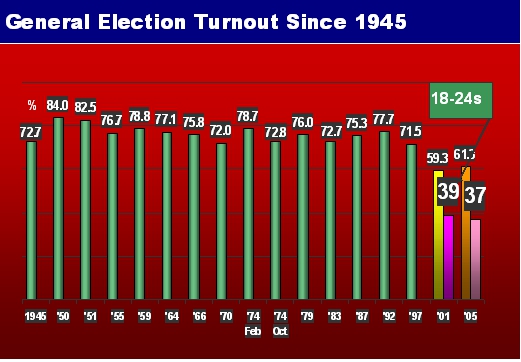 When the turnout dropped precipitously between the 1997 election (`Labour's Landslide') and 2001 (`Labour's Second Landslide') and hardly recovered in 2005 (`Labour's Landslip', which I defined as a `small landslide'), politicians and pundits quickly blamed `apathy'. It wasn't apathy, it was disengagement. There was no decline whatsoever in interest in politics. (Chart 2) Over all this time, interest in politics has been remarkably stable, one of the most stable series of poll findings existing over such a long time.

Further, the research carried out for the Hansard Society's 2010 Audit of Political Engagement last November found that when asked whether they agreed or disagreed that `It is my duty to vote', some three people in four agreed. Yet turnout fell to around six in ten of the electorate in the past decade. Two thirds of the electorate in fact disagreed that `politics is a waste of time'. And only one in five thought it was. Delving into the demographic analysis there is no significant difference between men and women, but there is, by age, by social class, and very much by educational attainment. While just over a half, 58 per cent, of those under 35 disagree, seven in ten disagree, and three quarters, 78 per cent, of middle-class people disagree, just over half, 54 per cent, of working class disagree. There is a clear stair step of those who disagree that `politics is a waste of time', 51 per cent of those without qualifications, six in ten of those with GCSE/Os, seven in ten with As, and 81 per cent with degrees. These two attitudinal measures are clearly interrelated with age. (See Chart 3) Seldom does one see a .93 correlation of anything attitudinal with demography, but when contrasting certainty of voting with age, just such a high correlation exists. Fewer than one in three potential voters under 30 are in their minds certain to vote in a general election, jumping to about two in three middle-aged, and over three in four of those over 75. Together, it appears that my long since held maxim that the parties should focus on the old folks, as they have four times the voting power of the youth vote, as there are twice as many of them and they are twice as likely to vote.

Sir Robert Worcester is the founder of MORI is and a Visiting Professor of Government and an Honorary Fellow at the London School of Economics for whom he wrote this article.