New York, NY, June 30, 2021 — A new Ipsos survey for the World Economic Forum finds an average of 85% of adults across 28 countries agreeing that information on the use of scarce natural resources should be included on product labels. The survey also finds 71% agreeing that companies using scarce natural resources should be assessed a tax for using them, even if it significantly increases the cost consumers pay for what these companies make.
Requiring that product labels include information on the use of natural resources is supported by at least three in four adults in every one of the 28 countries.
Those who favor taxing products using scarce natural resources are a majority in every country except Japan. Pro-tax sentiment is stronger in emerging countries – most of all in China, India, and Colombia – than it is in high-income countries, including most European countries and the United States. 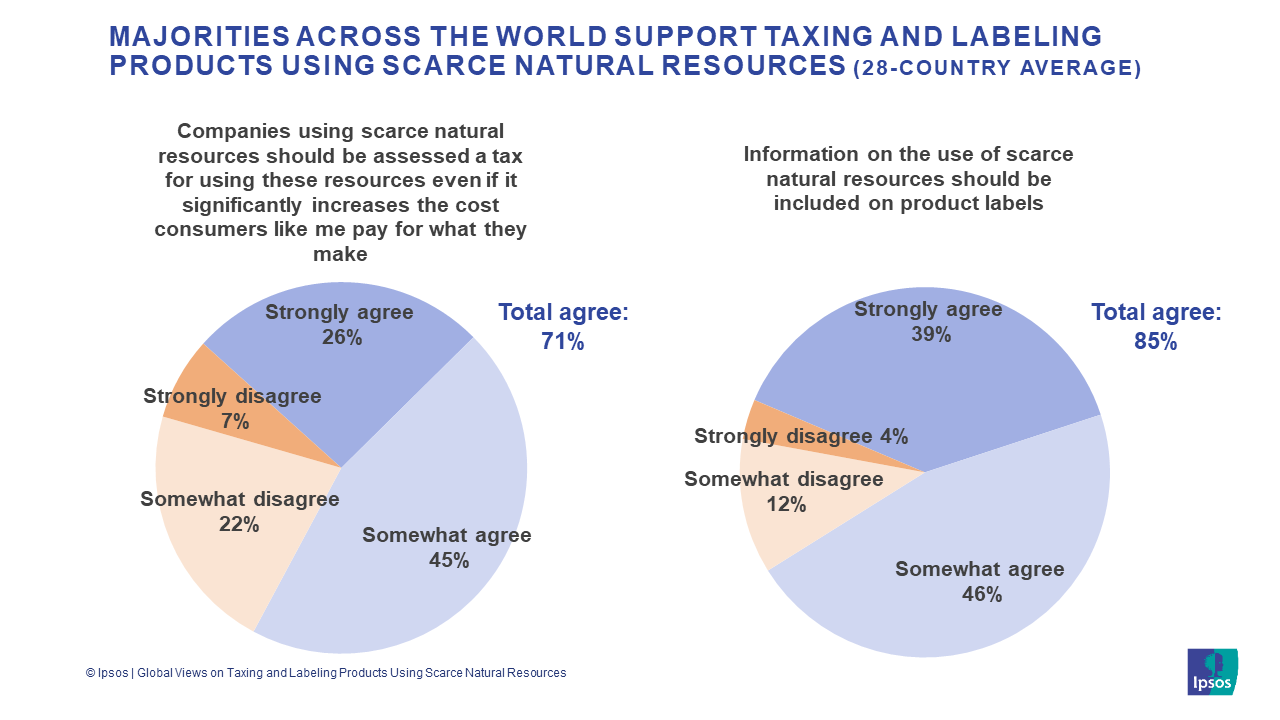 In aggregate at the global level, support for labeling and taxing products using scarce natural resources tends to be more prevalent among those with a higher level of education.It is remarkably consistent across gender lines and age groups.
The survey was conducted online among 19,510 adults between May 21 and June 4, 2021.

About the Study
These are findings from a 28-country survey conducted by Ipsos on its Global Advisor online platform, based on 19,510 interviews of adults aged 18-74 in the U.S., Canada, Malaysia, South Africa, and Turkey, and aged 16-74 in all other countries, between May 21 and June 4, 2021.
The sample consists of approximately 1,000 individuals in each of Australia, Belgium, Brazil, Canada, China (mainland), France, Germany, Great Britain, Italy, Japan, Spain, and the U.S., and 500 individuals in each of Argentina, Chile, Colombia, Hungary, India, Malaysia, Mexico, the Netherlands, Peru, Poland, Russia, Saudi Arabia, South Africa, South Korea, Sweden, and Turkey.
The samples in Argentina, Australia, Belgium, Canada, France, Germany, Great Britain, Hungary, Italy, Japan, the Netherlands, Poland, South Korea, Spain, Sweden, and the U.S. can be taken as representative of these countries’ general adult population under the age of 75.
The samples in Brazil, Chile, China (mainland), Colombia, India, Malaysia, Mexico, Peru, Russia, Saudi Arabia, South Africa, and Turkey are more urban, more educated, and/or more affluent than the general population. The survey results for these countries should be viewed as reflecting the views of the more “connected” segment of their population.
The data is weighted so that each country’s sample composition best reflects the demographic profile of the adult population according to the most recent census data.
The “Global Country Average” reflects the average result for all the countries where the survey was conducted. It has not been adjusted to the population size of each country or market and is not intended to suggest a total result.
Where results do not sum to 100 or the ‘difference’ appears to be +/-1 more/less than the actual, this may be due to rounding, multiple responses, or the exclusion of don't know or not stated responses.
The precision of Ipsos online polls is calculated using a credibility interval with a poll of N=1,000 being accurate to +/- 3.5 percentage points and a poll of N= 500 being accurate to +/- 5.0 percentage points. For more information on Ipsos’s use of credibility intervals, please visit the Ipsos website.
The publication of these findings abides by local rules and regulations.