Washington, DC, March 17, 2021 - At 44.7, this month’s Ipsos Global Consumer Confidence Index is up by eight-tenths of a point over last month, marking a new high since the start of the COVID-19 pandemic a year ago.
The Global Consumer Confidence Index is the average of 24 world markets’ National Indices. It is based on a monthly survey of more than 17,500 adults under the age of 75 conducted on Ipsos’ Global Advisor online platform. This survey was fielded between February 19 and March 5, 2021.
Six of the 24 surveyed markets show significant growth in their National Index when compared to February 2021: Great Britain (+3.6), the United States (+2.2), Belgium (+1.8), Canada (+1.7), Japan (+1.7), and Turkey (+1.6). Meanwhile, not a single market has experienced a significant drop, defined as 1.5 index points or more.

Roughly one year after the World Health Organization declared COVID-19 a pandemic on March 11, 2020, the Global Consumer Confidence Index comes in at 44.7, about four points below where it was then (48.5) as well as a couple of months earlier, in January 2020 (48.7), just before the world had heard of the coronavirus. With a 0.8-point uptick over February 2021’s reading, the index shows a monthly increase for the fourth straight month. 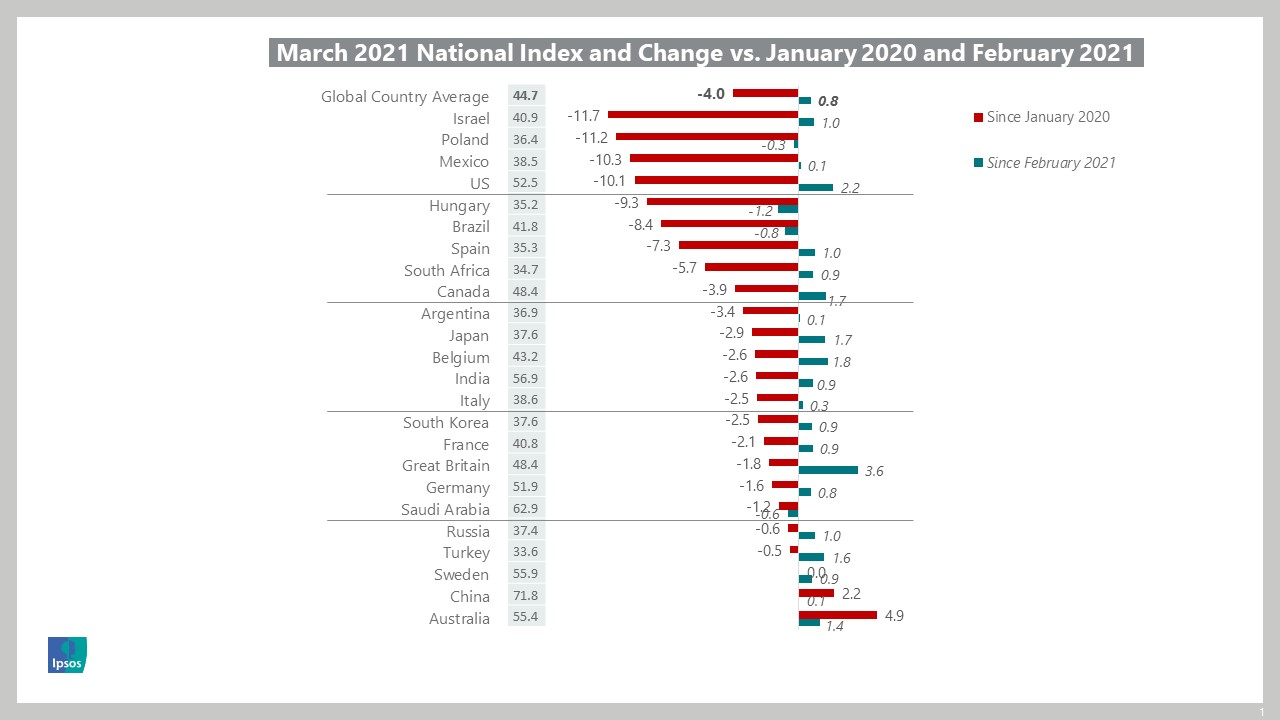 The Expectations, Jobs, and Investment Indices all display growth since February 2021. Among the 24 markets surveyed, Great Britain and the United States post significant gains for each index. 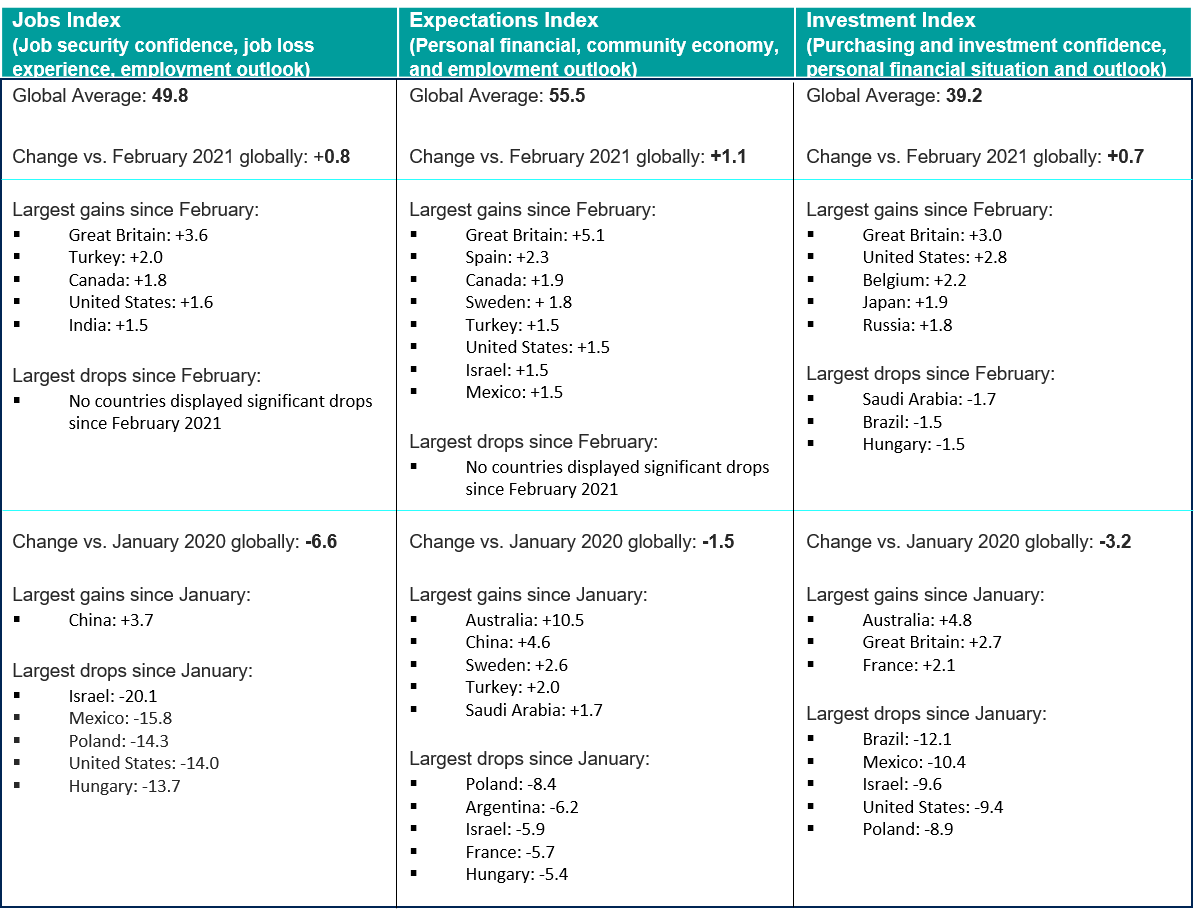 These findings are based on data from Refinitiv /Ipsos’ Primary Consumer Sentiment Index (PCSI) collected in a monthly survey of consumers from 24 markets via Ipsos’ Global Advisor online survey platform. For this survey, Ipsos interviews a total of 17,500+ adults aged 18-74 in the United States of America, Canada, Israel, Turkey, South Africa; and age 16-74 in all other markets each month. The monthly sample consists of 1,000+ individuals in each of Australia, Brazil, Canada, China (mainland), France, Germany, Italy, Japan, Spain, Great Britain, and the U.S., and 500+ individuals in each of Argentina, Belgium, Hungary, India, Israel, Mexico, Poland, Russia, Saudi Arabia, South Africa, South Korea, Sweden, and Turkey.
Data collected each month are weighted so that each country’s sample composition best reflects the demographic profile of the adult population according to the country’s most recent census data. Data collected each month are also weighted to give each country an equal weight in the total “global” sample. Online surveys can be taken as representative of the general working-age population in Argentina, Australia, Belgium, Canada, France, Germany, Great Britain, Hungary, Italy, Japan, Poland, South Korea, Spain, Sweden, and the United States. Online samples in Brazil, mainland China, India, Israel, Mexico, Russia, Saudi Arabia, South Africa, and Turkey are more urban, more educated, and/or more affluent than the general population and the results should be viewed as reflecting the views of a more “connected” population.
Sample surveys and polls may be subject to other sources of error, including, but not limited to coverage error, and measurement error. The precision of the Refinitiv/Ipsos online surveys is measured using a Bayesian Credibility Interval. Here, the poll has a credibility interval of +/- 2.0 points for countries where the 3-month sample is 3,000+ and +/- 2.9 points for countries where the 3-month sample is 1,500+. Please click here for more information.
The publication of these findings abides by local rules and regulations.
The results reported each month in the Refinitiv/Ipsos’ Primary Consumer Sentiment Index are based only on that month’s data (hence, the base for each country is 500+ or 1,000+) and comparisons are made against results from other months which are also each based on one month’s data. In contrast, the results reported any given month in Ipsos’s Global Consumer Confidence at-a-Glance are based on data collected not only that month, but also during the two previous months and consist of past 3-month “rolling averages”. This technique allows for tripling the sample size for each metric. Hence, the base for any country ranges from 1,500+ to 3,000+. This increases the reliability of the findings and the statistical significance of reported variations over time, However, to heighten the freshness of the findings reported any given month, the data from the same month is given a weight of 45%, the data from the previous month a lesser weight of 35%, and the data from the earliest of the three months an even lesser weight of 20%.
The Refinitiv/Ipsos Primary Consumer Sentiment Index (PCSI), ongoing since 2010, is a monthly survey of consumer attitudes on the current and future state of local economies, personal finance situations, savings, and confidence to make large investments. The PCSI metrics reported each month for each of the 24 countries surveyed consist of a “Primary Index” based on all 11 questions below and of several “sub-indices” each based on a subset of these 11 questions. Those sub-indices include an Expectations Index; Investment Index; and, Jobs Index.