The prevailing view among citizens of most of the countries recently surveyed by Ipsos is that their political and economic system is broken. On average across 28 countries, 64% feel the economy of their country is rigged to advantage the rich and powerful and 63% say that traditional parties and politicians don’t care about people like them

The survey conducted from September to early November among more than 26,000 online adults finds that, among all countries surveyed, anti-establishment feelings are most widespread in Romania, Turkey, Thailand, and South Africa, and least so in Sweden and Germany.

However, broken-system sentiment has receded since March-April 2021 when Ipsos conducted a similar survey in 24 of the 28 countries. It has declined steeply in Chile, Colombia, South Korea, Italy, Brazil, and Peru – all countries where elections resulted in a change of governing party. The only countries showing a significant increase in broken-system sentiment are Great Britain and Turkey.

To measure the magnitude of anti-establishment sentiment, Ipsos has developed the Broken-System Index, a peer-reviewed composite metric based on the level of agreement or disagreement with five statements. 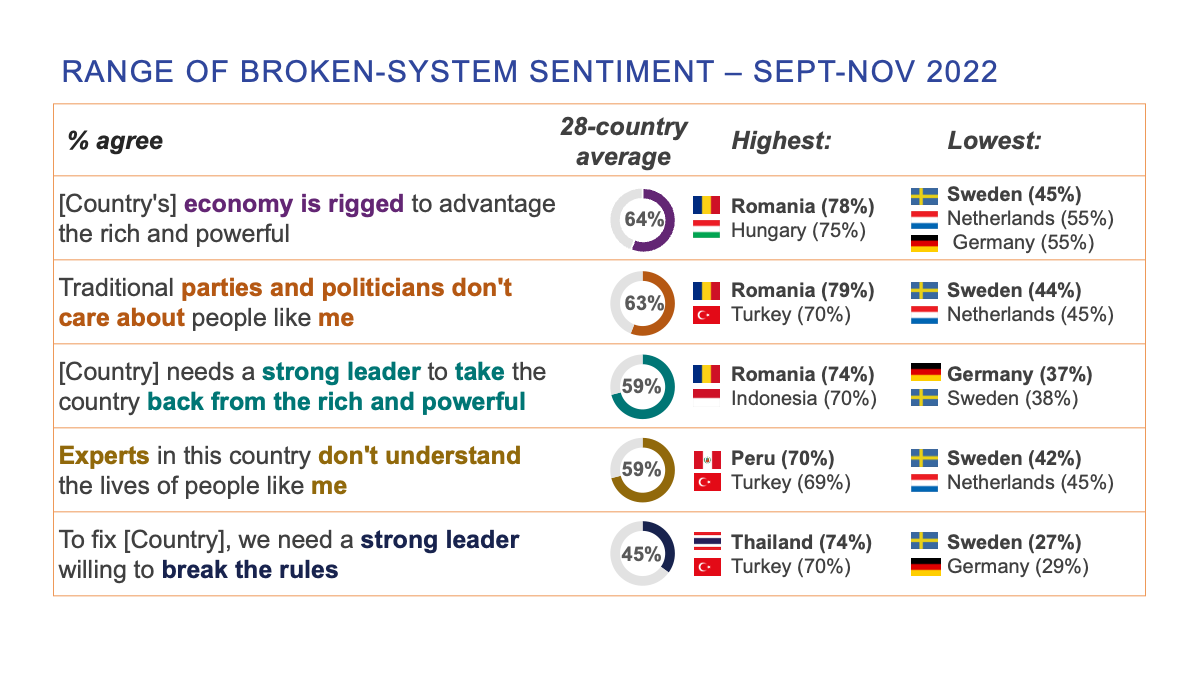 On average across 28 countries, about six in ten adults surveyed agree that their country’s economy is rigged to favor the rich and powerful, that traditional parties and politicians don’t care about people like them, that their country needs a strong leader to take the country back from the rich and powerful, and that experts don’t understand the lives of people like them. Just under half agree that, to fix it, their country needs a strong leader willing to break rules.

Do elections restore trust in the system?

Across the 24 countries already surveyed in March-April 2021, the Broken-System Index has receded by an average of 0.12 points.

Only four of the 24 countries show any uptick in their index score: one too small to be significant in the case of Belgium and the Netherlands, but a significant one in the case of Great Britain (+0.19 points) and Turkey. None of these countries underwent a general or presidential election since the last survey.

In contrast, 20 countries show a drop – albeit a very small one in several cases. All but three of them had a major national election in the past 18 months. Furthermore, in all six countries showing a drop of more than 0.35 points – Chile, Colombia, South Korea, Italy, Brazil, and Peru – the election brought in a new head of government hailing from a different party than their incumbent.

This suggests that national elections may act as a pressure valve for anti-establishment sentiment and help restore trust in the system.

Broken-system sentiment and perceptions of widespread corruption tend to go hand in hand.

A comparison of Transparency International’s Corruption Perception Index (CPI) with the Broken-System Index in each of the 28 countries surveyed by Ipsos finds them strongly correlated. Among them, Sweden, Germany, and the Netherlands both show the highest CPI scores (meaning they have the lowest levels of perceived corruption) and the lowest scores on Ipsos’s Broken-System Index.

In contrast, the four countries with the highest scores on Ipsos’ Broken-System Index have a relatively low CPI score.

This suggests that the sentiment that corruption is commonplace triggers feelings that the system is broken – unless distrust of the system encourages corrupt practices by making them seem justified. 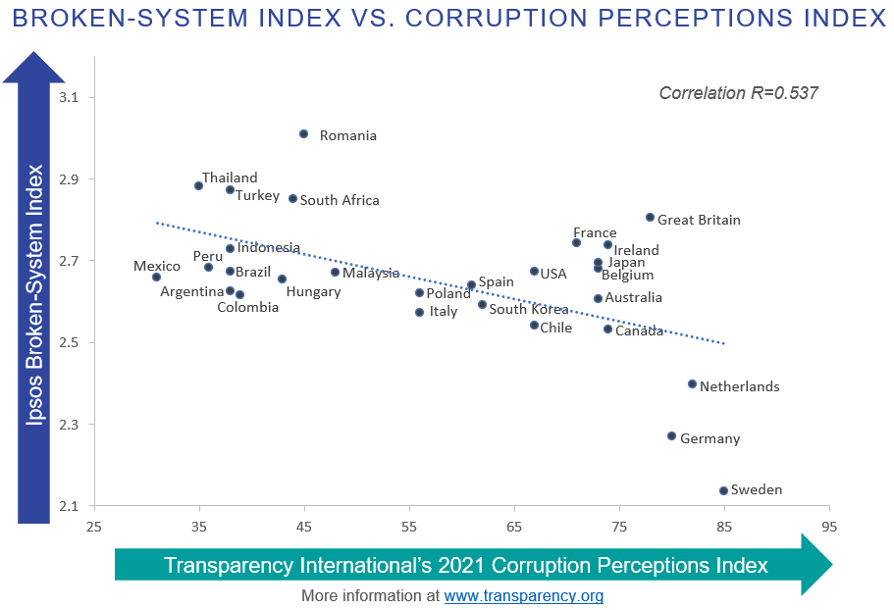