The annual Ipsos Climate Change Report 2022 shows the majority of Australians are concerned about climate change (83%) and 70% consider that Australia is already being affected by climate change, primarily with more frequent and extreme natural disaster events which is a steady increase in concern and up from 56% in 2011.

Interestingly, the proportion of people expressing doubt about whether climate change is actually occurring has remained relatively steady over the same period, with 24% currently expressing this view. The level of doubt is significantly higher in NSW with this figure rising to one in three (32%).

Data collected in March 2022 shows that Australians see the most benefit in our governments taking action to address climate change as opposed to what individuals and SMEs can achieve.

Two thirds (66%) of people agree that Australia should be doing more to address climate change and 64% want Australia to be a global leader in emissions reduction.

Currently opinions are divided on whether current Federal Government measures to address climate change are too much, too little, or about right.

There are some clear voting intentions when it comes to climate change policy:

Ipsos Public Affairs Director, Stuart Clark, said: “Awareness and expectations among Australians regarding our climate are growing. There is a concern among Australians and a desire for the government to act. Policy will be a key part of the people’s decision making coming into the election. The question is how the key players will manage it given there is a divide in the community as to what is too much or too little action.

Do businesses need to become more public when it comes to disclosing environmental policies, practices and performance?

When it comes to business actions, Australians focus predominantly on the role of multinationals and large Australian businesses for their capacity to effect positive impacts on climate change.

Only 40% of Australians consider that businesses in Australia are committed to climate change. Consumers see the solution as twofold – there is strong potential for businesses to innovate and drive technology solutions; and an increase in transparency is required. 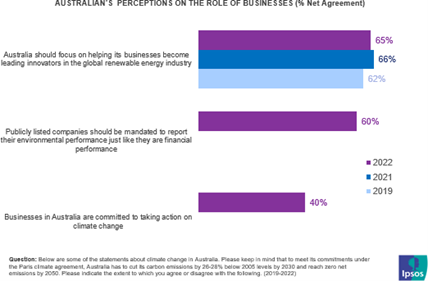 Sixty percent (60%) of Australians consider that publicly listed companies should be mandated to report on environmental performance.

Australians also see individuals as having a role in addressing climate change; however, perceive their actions may have less of an impact than government and business. Regardless, Australians are increasingly conscious of their own personal empowerment and action they can take.

The Department of Industry, Energy, Science and Resources’ statistics on household solar installations identify that Australia has the highest uptake of solar globally at approximately 30%1. The Ipsos Climate Change Report 2022 figures align showing 34% of Australians have installed solar.

Australians are also active in improving energy efficiency around the home (36%) and considering products being purchased with respect to how they are made, materials and end-of-life disposal (35%).

The next wave of action by Australians will be:

Victorians are the most positive about the influence of protests and rallies on outcomes with 52% agreeing that ‘climate activism such as protests and rallies on climate change can bring about positive change’. Queenslanders and Western Australians are the least in agreement about the potential outcomes of climate activism (31% and 30% agreement respectively).

At least 1000 interviews were conducted via online panel between for each wave of the research among Australian adults aged 18+. Data is weighted to match the profile of the Australian population.

Find out more about the Ipsos Climate Change Report